Monica Puig net worth: Monica Puig is a Puerto Rican professional tennis player who has a net worth of $2 million. Monica Puig was born in Hato Rey, San Juan, Puerto Rico in September 1993 and now resides in Miami, Florida. She turned professional in 2010 and has earned $1.7 million in prize money.

Puig has won two career WTA singles titles and six ITF titles. Her highest ranking was #33 in July 2016. In 2016 Puig won a gold medal in tennis at the Rio Olympic Games. She became the first ever athlete to win an Olympic gold medal for Puerto Rico and the first Latin American player to win the women's singles tournament. She was also the only unseeded female to win a gold medal since tennis was reintroduced as an Olympic sport in 1988. 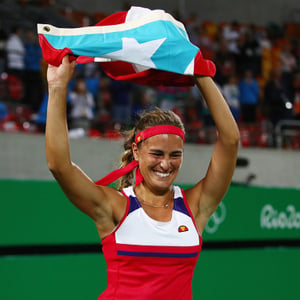