Martina Hingis net worth: Martina Hingis is a Swiss former professional tennis player who has a net worth of $25 million. Martina Hingis accumulated her net worth through her years in pro tennis and is the winner of nine grand slam wins. Born in Slovakia in 1980, Martina Hingis began playing tennis at a very young age and turned pro when she was only 14 years old.

One year later she became the youngest Grand Slam champion of all time, eventually turning into one of the top women's tennis player in the world in the late 1990s. As one of the best, she took part of a high-profile doubles team with fellow teen sensation Anna Kournikova. But in 2002, ankle injuries cut her career short, and Hingis announced her retirement in 2003. However, three years later she made a comeback to professional tennis with her participation in the Australian women's hardcourt championships in January 2006. Her second retirement came in November 2007 after testing positive for cocaine cocaine at that year's Wimbledon tournament. Hingis denied using drugs, but decided not to appeal the imminent ban. Throughout her career, she won five Grand Slam singles titles (three Australian Opens, one Wimbledon, and one US Open) and spent a total of 209 weeks as world #1. Due to her remarkable achievements, Time named Hingis as one of the 30 Legends of Women's Tennis: Past, Present and Future in 2011, and two years later she was elected into the International Tennis Hall of Fame. 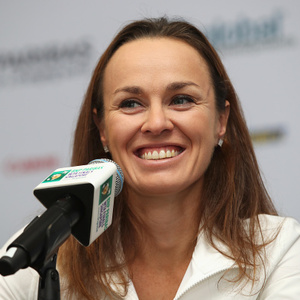