How much is Marion Bartoli Worth?

Marion Bartoli Net Worth: Marion Bartoli is a French retired professional tennis player who has a net worth of $10 million. Marion Bartoli was born in Le Puy-en-Velay, Haute-Loire, France in October 1984. She started playing tennis at six years old. Marion was known for her unorthodox style of using two hands on her forehand and backhand. Bartoli turned professional in February 2000. During her tennis career she won over $11 million in prize money. She finished with eight career WTA titles and six ITF titles. Her highest ranking was #7 in the world in January 2012. Bartoli's biggest win was the 2013 Wimbledon. She reached the semifinals at the French Open in 2011 and the quarterfinals of the Australian Open in 2009 and the US Open in 2012. As a doubles player she won three WTA and one ITF titles and was ranked #15 in July 2004. She reached the semifinals of the US Open in 2003 and the quarters of Wimbledon in 2004. She was the only player to have played at the WTA Tour Championships and the WTA Tournament of Champions in the same year in 2011. Bartoli retired from the sport in August 2013. She had a three year clothing-deal with Lotto. 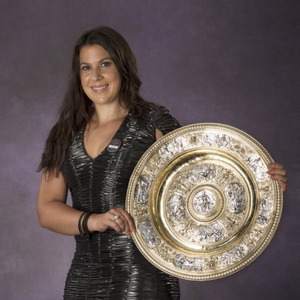