Maria Kirilenko Net Worth: Maria Kirilenko is a Russian tennis player and model who has a net worth of $8 million. Maria Kirilenko was born in Moscow, Russian SFSR, Soviet Union in January 1987. Maria won the 2002 U.S. Open Girls' Singles championship and won the China Open for her first WTA Tour title in 2005.

She was won six career WTA and three ITF titles and has won over $6 million in career prize money. Kirilenko has reached the quarter-finals of the Australian Open in 2010, Wimbledon in 2012, and the French Open in 2012. As a singles player she reached the semi-finals and finished fourth place at the 2012 Olympic Games. As a doubles player Kirilenko has won 12 WTA titles. She reached the finals of the Australian Open in 2011 and of the French Open in 2012. She also reached the semi-finals of the US Open in 2011. Maria won a bronze medal at the 2012 London Olympics for women's doubles tennis for Russia. She was named as the face of Adidas by Stella McCartney tennis range in 2006 and played in the gear exclusively since then. Maria appeared in the 2009 Sports Illustrated Swimsuit Edition. She was previously engaged to NHL star Alexander Ovechkin but called off the wedding in July 2014. 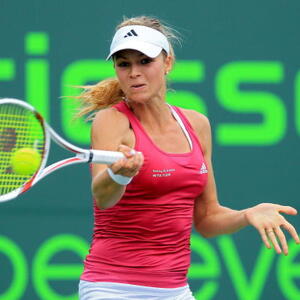