Mardy Fish net worth: Mardy Fish is an American professional tennis player who has a net worth of $4 million. Mardy Fish first gained prominence in the 2000s. Fish has won six tournaments in the ATP Tour and reached the finals of the Masters Series – Cincinnati in 2003 and 2010; Indian Wells in 2008 (defeating Roger Federer in the semi-finals) and more recently Montreal in 2011.

Fish also gained a silver medal at the 2004 Summer Olympics. His performances at Grand Slam tournaments are equally impressive: he reached the quarter finals at the Australian Open in 2007, the US Open in 2008 and Wimbledon Championships in 2011. 2011 was a good year for Fish as it was his first time reaching the quarterfinals at Wimbledon and more impressively, he became America's one, overtaking old-time friend and doubles partner Andy Roddick. He's also the current world's number seven. Fish was rarely seen during the 2012 season as he underwent a cardiac ablation after his match in Miami. 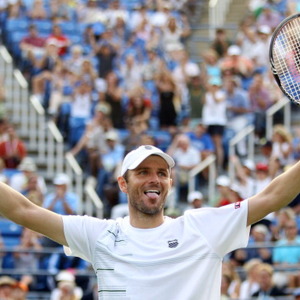