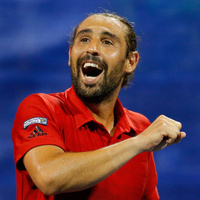 Marcos Baghdatis net worth and earnings: Marcos Baghdatis is a Cypriot professional tennis player who has a net worth of $5 million. Marcos Baghdatis has earned his net worth from his professional tennis career. During his career he was runner-up in the 2006 Australian Open, as well as a semifinalist at the 2006 Wimbledon Championship where he reached a all-time career-high ATP singles ranking of World No. 8 in August of 2006. Marcos was born on June 17, 1985 in Paramytha, Limassol District, Cyprus. His father Christos is Lebanese and migrated to Cyprus where he soon met a Cypriot woman who he married. At the age of five Marcos began playing tennis with his brothers and his father. He is also a football player and supporter of the Apollon Limassol football team located in Cypruss. He trained for tennis in Paris at the Mouratoglou Tennis Academy on a Scholarship from the Olympic Solidarity Youth Development. He has been a member of the OSYDS since he was 13, where he learned to speak French. In order for Baghdatis to continue playing professional tennis he was granted an exception from the Cypriot national service which was a mandatory program on January 28, 2006. In 2005 Baghdatis was the recipient of the Cyprus Male Athlete of the Year Award. Marcos married former Croatian tennis player Karolina Sprem on July 14, 2012.