In 2000 he won his first Grand Slam title at the US Open beating Pete Sampras. Safin won the 2005 Australian Open defeating Lleyton Hewitt. At the Davis Cup he helped lead Russia to victory in 2002 and 2006. In 2008 Marat became the first Russian man to make the semi-finals at Wimbledon. He was known for his temper and emotional outbursts on the court and said that he had broken over 1,000 tennis rackets in his career.. His younger sister Dinara Safina is also a former #1 ranked WTA player, making Marat and Dinara the first brother and sister who have both been ranked #1. Marat finished his career with 15 singles and two doubles titles. He retired form tennis after the 2009 Paris Masters. He has served as a member of the Russian Olympic Committee and been an official for the Russian Tennis Federation. He was elected to the Russian Parliament in 2011 as a member of Vladimir Putin's United Russia Party. Safin earned over $14 million in prize money during his tennis career. 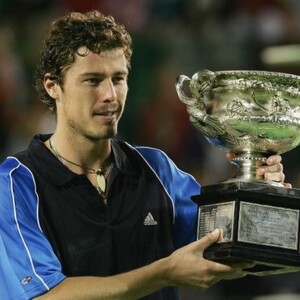