What is Lindsay Davenport's Net Worth?

Lindsay Davenport is an American former professional tennis player who has a net worth of $25 million. At the peak of her career Lindsay Davenport was ranked as the #1 singles player in the world for 98 weeks. She performed well as a singles player from the very beginning of her career, reaching the quarterfinals, semifinals, or finals of every tournament she entered. However, it was not until 1996, when she won the Gold Medal at the Atlanta Olympics that she seemed to come into her own. For the next ten years, she would remain a formidable tennis standout, joining Steffi Graf, Martina Navratilova, and Chris Evert, in the small group of female tennis players who have reached World #1 status four times. She won the Australia Open, the US Open, Wimbledon, and the WTA Tour Championships, among many other tennis tournaments.

During her career Lindsay won a total of $22,166,338 in tournament earnings. She earned tens of millions more from endorsements. She is one of the 10 highest-earning female tennis players in history.

Davenport was born in Palos Verdes, California on June 8, 1976 to parents Wink Davenport and Ann Davenport. Her family was very athletic, as her father had been a member of the U.S. volleyball team at the 1968 Summer Olympics and her mother was the president of the Southern California Volleyball Associations. She also has two older sisters who played volleyball. Davenport decided to begin playing tennis at the age of six. She initially was coached by Robert Lansdorp while she attended Chadwick School. At the age of 14, she joined the United States Tennis Association and won the Junior U.S. Open in 1992. When she was 16, her family moved to Murrieta, California where she attended Murrieta Valley High School. During this time, she trained with Lynne Rolley and Robert Van't Hof.

Davenport's first professional win came in 1990 when she won the Ojai Tennis Tournament, though she didn't officially become a professional until two years later. In 1993, she reached the top 100 in doubles ranking and also reached the third round at the 1993 Australian Open as well as the third round of the 1993 Wimbledon Championships. After a good performance at the U.S. Open, she ended the year ranked 24.

In 1994, she won her first professional tournament in Brisbane, Australia. She also did well but did not win at the Australian Open and Wimbledon and won the title in Lucerne. The same year, she also performed well when paired with Lisa Raymond and then Arantxa Sanchez in doubles matches. By the end of 1994, Davenport made the decision to hire Craig Kardon as her coach.

The next year, in 1995, Davenport reached the finals of the Sydney tournament and then the Australian Open, ultimately losing in the final rounds. She then went on to win on clay in Strasbourg, though then lost the French Open in the fourth round. She was also upset in the fourth round at Wimbledon and in the second round at the U.S. Open. She then hired Robert Van't Hof as her full-time coach. In 1996, she was a quarterfinalist at the Australian Open and again won on clay and Strasbourg before losing the French Open in the quarterfinals. She was able to beat star Steffi Graf for the first time in her career at a tournament in Los Angeles. She went on to win gold at the Summer Olympics in 1996.

In 1997, Davenport started the year off strong by winning the Indian Wells tournament. She then lost the French Open in the fourth round and Wimbledon in the second round. She did reach her first grand slam semifinal at the U.S. Open before losing to Hingis. The following year, in 1998, she reached the semifinals at the Australian Open and then won the tournament in Tokyo. She won the singles title at the 1998 U.S. Open, her first Grand Slam singles title, defeating Venus Williams and Hingis. The year of 1998 saw Davenport win singles titles in Sydney, Madrid, and Wimbledon. 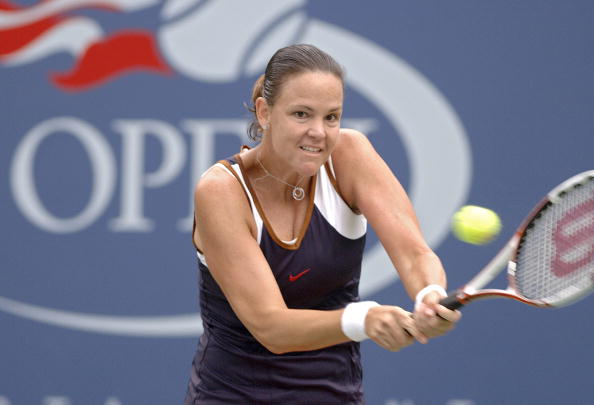 In 2000, Davenport began the year by winning the singles title in Sydney and also the 2000 Australian Open. She then won at the Indian Wells tournament and in Miami. She made it to the finals at Wimbledon and the U.S. Open, before being beaten by Venus Williams. 2001 was another successful year, as Davenport made it to at least the quarterfinal round in all seventeen of her singles events, ultimately winning seven singles titles. The following year was less successful as she did not win a single singles title in 2002.

Davenport started off 2003 by hiring coach Rich Leach before moving on to coach Adam Peterson. The year was semi-successful for her but it wasn't until 2004 that Davenport seemed to hit a groove with her new coach, winning seven titles and finishing the year ranked first for the third time in her career. In 2005, her success continued as she again was ranked first, becoming the fourth ever female player to ever be ranked first four times.

Over the next few years, Davenport remained very competitive though at times had to take time off from playing due to injury or because she was pregnant. In 2011, Davenport won the Women's Legends Doubles at the French Open and also the Wimbledon Invitational Doubles Event, both times with partner Martina Hingis. She then announced she wouldn't compete for the rest of the season due to being pregnant with her third child. She didn't return to professional tennis after that season though she did begin coaching player Madison Keys just before the 2015 season.

Throughout her career, Davenport has won a total of 55 World Tennis Association singles titles, 38 WTA Tour doubles titles, and is one of the top female tennis earners of all time.

In 2003, Davenport married Jon Leach, an investment banker who is the brother of her former coach, Rick Leach. The couple had a baby together in 2007. Two years later, they had a daughter and then a third child in 2012. In 2014, they had another daughter. The family has residences in Irvine, California, Laguna Beach, California, and Kona, Hawaii.

In 1997 Lindsay paid $2.04 million for a newly-built, 5000 square-foot mansion in gated community in Laguna Beach, California. Today this home is worth $9-11 million. Since Lindsay and her family have homes all over the country and typically reside at their Sarasota, Florida mansion, they have rented this property since 2022. They made it available to rent in October 2022 for $27,500 per month.