Li Na net worth: Li Na is a Chinese professional tennis player who has a net worth of $60 million dollars. At her peak, Li Na was one of the highest paid athletes on the planet, earning $18 million in salary and endorsements. She achieved a career-high WTA ranking of world No. 2 in 2014. She has been quite successful on both the ITF and WTA circuits, winning 19 ITF tournaments and 7 WTA tournaments. She reached the finals of the Australian Open in 2011 and 2013, and the quarterfinals of Wimbledon and the US Open. In 2011, she became the only Chinese player, male or female, to ever win a Grand Slam Singles event, when she won the French Open.

Early Life: Li Na was born in Wuhan, Hubei, China, on February 20, 1982, the daughter of Li Yanping and Li Shengpeng. Her father was a professional badminton player who died from a rare heart disease when Li was just fourteen. Na began playing badminton as a child, originally intending to follow in the footsteps of her father. She shifted to tennis when she was eight, and joined the Chinese National Team when she was fifteen. The following year, she began being sponsored by Nike and she went on to the John Newcombe Academy to study tennis near Austin, Texas.

Career: After spending ten months in Texas improving her game, she returned to China and turned pro in 1999, at the age of sixteen. Li won three out of her four ITF Circuit Singles tournaments and all seven ITF doubles tournaments shortly after turning pro. In 2000, she won 52 singles matches on the circuit, the highest by any player at that time.  After taking some time off to complete her degree in Journalism at the Huazhong University of Science and Technology, where she completed her bachelor's degree in journalism, she returned to professional tennis in May 2004, after having not played since 2002. She won 26 successive matches only to have her winning streak finally snapped by Evgenia Linetskaya in the semifinal of the $50k Bronx tournament. 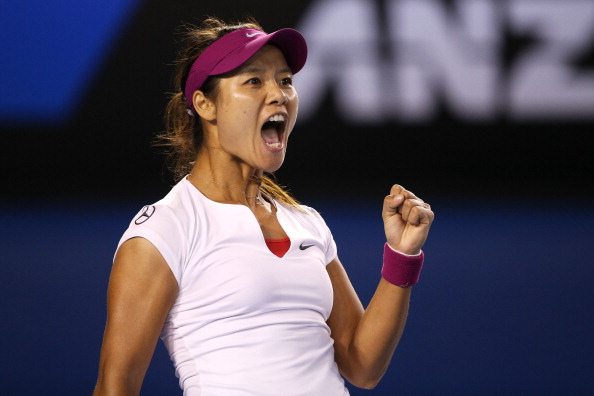 In 2008, Na rose to even further prominence after she won the Grand Slam singles title for the first time at the 2011 French Open, making her the first Grand Slam singles champion from Asia, make or female. She also won her second WTA singles title at the 2008 Mondial Australian Women's Hard in Gold Coast, Australia. By the end of 2009, Na's ranking in the world was No. 15. At the 2010 Australian Open, Na defeated Venus Williams before ultimately losing to her in the semi-final. This performance, however, solidified her place as the first Chinese woman to break into the Top 10 of women's pro tennis. At the 2010 Aegon Classic, Na defeated Maria Sharapova in the final to win the tournament. 2011 proved to be an eventful year for Na as she reached the finals of the Australian Open but lost to Kim Clijsters in the final.

On June 4, 2011, Na won her first Grand Slam singles event at the French Open when she defeated Francesca Schiavone in the final. Na's world ranking then leaped to No. 4. Unfortunately, she had a disappointing performance in the 2012 London Olympics, crashing out in the first round. She switched coaches and appointed Carlos Rodriguez as her new coach and mentor. Later that year, she won her career's sixth WTA title when she clinched the 2012 Western & Southern Open in Cincinnati.

In 2013, Na started her year off with a bang when she won her seventh WTA title of her career at the Shenzhen Open. In the 2013 final at the Australian Open, Na twisted her ankle, fell on her head, and momentarily lost consciousness before losing to opponent Victoria Azarenka. The following year at the Australian Open, she won her first title when she defeated Dominika Cibulkova in the final. Later that year, Li reached a career-high singles ranking of No. 2 in the world. Na, plagued by a knee injury, announced her retirement from professional tennis in September 2014. She was ranked number six in the world at the time.

Personal Life: Li married Jiang Shan on January 27, 2006. He later became her personal coach. Li announced in January 2015 that she and her husband were expecting their first child. She gave birth to her daughter Alisa in June 2015. The couple had a second child, a son, in December 2016.