Kim Clijsters net worth: Kim Clijsters is a retired Belgian professional tennis player who has a net worth of $20 million dollars. Affectionately nicknamed 'Aussie Kim' by the Australians, she was born June 8, 1983 in Bilzen, Belgium. Clijsters is a former world No. 1 in both singles and doubles tennis. She was widely recognized for her all-court defense and her ability to wear her opponents down with her speed and athleticism. She began winning tennis championships at the age of 11 and became an accomplished junior player, finishing as runner-up in the 1998 Wimbledon junior event and finishing 11th in the year-end singles ranking. She won the French Open title with Jelena Dokić that same year. She made her professional debut in 1999 at the Women's Tennis Association tour in Belgium. In 2002, she won the Masters and a year later she earned world No. 1 ranking, making her the first player to reach the rank without winning a Grand Slam singles title (an honor she would later earn in 2005). She retired in 2007 but made a comeback in August 2009 when she played against Serena Williams. By the year 2012, Clijsters had become a four-time Grand Slam winner. Clijsters played the last singles match of her career at the 2012 U.S. Open where she lost in the second round to British player Laura Robson. Clijsters married American basketball player Brian Lynch in 2007 and gave birth to daughter Jada Elle in 2008. They have two children together.

Is September 2019, the 36-year-old Kim announced she was planning to return to professional tennis at the start of the 2020 season. 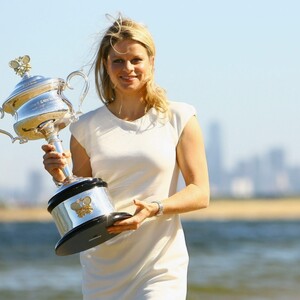