Kei Nishikori net worth and salary: Kei Nishikori is a Japanese professional tennis player who has a net worth of $24 million. Kei Nishikori was born in Matsue, Shimane, Japan in December of 1989. He is probably best known throughout the international tennis community for reaching the finals of the 2014 US Open.

Kei's career in tennis began when he started playing the game at five years old. When he was 17, he qualified for the ATP main draw at the Countrywide Classic in Los Angeles, California. After that, it was only a short matter of time before he won the 2004 Riad 21 Tournament title and was a quarter-finalist at the 2006 Junior French Open. After that, he won the doubles championship at the 2006 Junior French Open and won the 2007 Luxilon Cup as well. Kei finally turned professional in 2007, and has gone earn to earn tens of millions of dollars in salary and endorsements. Between June 2017 and June 2018, Kei earned $33 million, of which $30 million came from endorsements. He has won 11 career singles titles so far. Nishikori's highest ranking came in March 2015 when he was ranked #4 among players all over the world. He reached the quarterfinals of the Australian Open in 2012 and the fourth round of the French Open in 2013. In 2014 he reached the finals of the US Open after defeating Novak Djokovic, before eventually losing to Marin Cilic in straight sets in the final. He also reached the fourth round of Wimbledon in 2014 and was runner up at the 2014 Madrid Masters. Kei holds the distinction of being the only Japanese tennis player in tennis history to be ranked in the top 10 in the ATP Singles Rankings. In 2008 he was named the ATP Newcomer of the Year. On the equipment front, he plays with a Wilson racquet and wears Uniqlo and Adidas. He is sponsored by TAG Heuer and Nissan Foods.

He also wears a Cup Noodles badge on his sleeve. 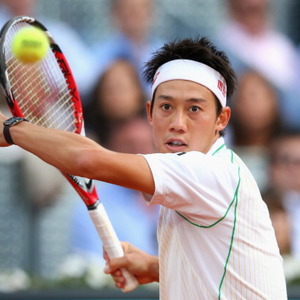