Justine Henin Net Worth and career earnings: Justin Henin, known between 2002 and 2007 as Justine Henin-Hardenne, is a retired Belgian professional tennis player and former World No. 1 who has a net worth of $14 million. Justine Henin was born on June 1, 1982 in Liege, Belgium where hen Justine was two, her family moved to a house in Rochefort, situated next to the local tennis club, where she played tennis for the first time. Henin's mother routinely took here across the border to France to watch the French Open which is where she saw the 1992 final involving her idol Steffi Graf and Monica Seles, an experience that impressed Henin.

Henin won 43 WTA singles titles and seven Grand Slam singles titles, including four French Open titles, one Australian Open title, and two US Open titles. She has also won the year-ending Sony Ericsson Championships twice and the singles gold medal at the 2004 Summer Olympics in Athens. Tennis experts cite her mental toughness, the completeness and variety of her game, her footspeed and footwork, and her one-handed backhand as the principal reasons for her success. When Henin retired for the first time in 2008, Billie Jean King said that "pound for pound, Henin is the best tennis player of her generation" and "Justine is the best women's athlete I've ever seen. January 26,2011, Henin announced her definitive retirement from professional tennis. 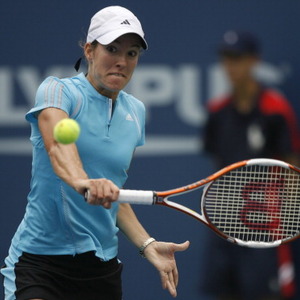