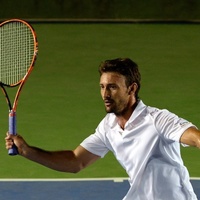 Juan Carlos Ferrero Net Worth: Juan Carlos Ferrero is a retired Spanish professional tennis player who has a net worth of $10 million dollars. Born in Ontinyent, Spain, in 1980, Juan Carlos Ferrero started playing tennis with his dad when he was a boy. Ferrero began playing in the juniors and attracted attention after his French Open championship appearance in 1998. Later that year, he made his professional debut. Ferrero won his first Grand Slam singles title at the French Open in 2003; it is the only Grand Slam win of his career. He made it to the finals of the US Open the same year, but lost to the eventual champion. Ferrero's best Australian Open finish was in the semifinals in 2004. He made it to the quarterfinals of Wimbledon in 2007 and 2009. Ferrero amassed a 479-262 career record as a singles player on his way to holding the world's number one ranking in 2003. He played in 30 doubles matches, compiling a 6-24 record with no titles. Ferrero was part of the Davis Cup-winning Spanish team in 2000, 2004, and 2009. Ferrero retired from the game on October 23, 2012. During his career, he earned the nickname Mosquito because of his slim frame and intense speed.