He reached the finals of the 2008 Australian Open as an unseeded player. Tsonga defeated #2 Rafael Nadal in the semifinals and lost to #3 Novak Djokovic in the finals. Tsonga won his first ATP Masters Series championship in 2008 at the Paris Masters. He has made the semi-finals of Wimbledon in 2011 and 2012, and the French Open in 2013. Jo-Wilfried has reached the quarter-finals of the US Open in 2011. He has won 11 career singles titles and has a career prize earnings total of over $13 million. As a doubles player he was won four career titles. Representing France he won a Silver medal in the 2012 London Olympic games as a doubles player. Tsonga holds Grand Slam wins over Nadal, Djokovic, Roger Federer, and Andy Murray. As of August 2014 he was ranked #10 in the World. 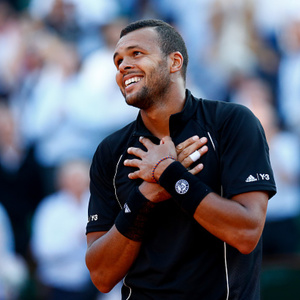