James Blake net worth and career earnings: James Blake is an American retired professional tennis player who has a net worth of $8 million dollars. James Blake was born in Yonkers, New York in December 1979. He started playing tennis at age five with his brother Thomas who has also played professionally.

James was diagnosed with scoliosis and had to wear a back brace for 18 hours a day for five years. As a child he was friends with John Mayer. Blake studied at Harvard University but left to pursue his tennis career. At 21 he played in his first Davis Cup in 2001. Over his career he appeared in 24 singles finals, winning 10 times. His highest singles ranking was #4 in the World. Blake made the finals of the 2006 Tennis Masters Cup. He made the semifinals at the Beijing Olympics. He made the quarterfinals of the US Open twice and the Australian Open. He was awarded Comeback Player of the Year in 2005. He was honored with being the Arthur Ashe Humanitarian of the Year in 2007. His 2007 autobiography Breaking Back: How I Lost Everything and Won Back My Life made the New York Times Best Seller list. He formally retired from tennis after the 2013 US Open. He became sponsored by Fila in 2009. James created a new racket with Prince using their O3 technology. 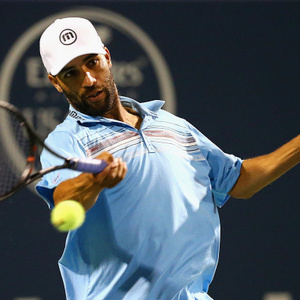