Gustavo Kuerten Net Worth: Gustavo Kuerten is a Brazilian retired professional tennis player who has a net worth of $10 million. Gustavo Kuerten was born in Florianopolis, Brazil in September 1976. Kuerten is also known by the nickname "Guga". Guga started playing tennis at six years old. He learned from Carlos Alves and met coach Larri Passos at 14 years old.

Gustavo turned professional in 1995. He is a former World #1 ranked tennis player. Kuerten won the French Open three times in 1997, 2000, and 2001. In 2000 he won the Tennis Masters Cup and became the only player to defeat both Andre Agassi and Pete Sampras in the same major tournament. From 2002 to 2005 Guga suffered from many injuries and missed a lot of tournaments. He made some comebacks but eventually retired in 2008. During his career Kuerten earned over $14 million in prize money and won 20 titles. He used Head racquets and Diadora clothes during his career. He signed endorsement deals after his retirement with Lacoste and Peugeot. He started his own brand of clothes and glasses called Guga Kuerten. He was inducted into the International tennis Hall of Fame in 2012. 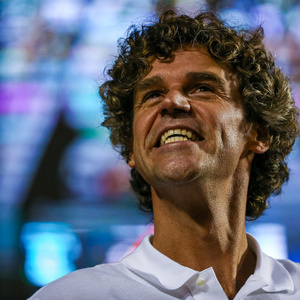