Grigor Dimitrov net worth: Grigor Dimitrov is a Bulgarian professional tennis player who has a net worth of $12 million. As of this writing, his career high ATP ranking is #3, which he achieved in November 2017.

Grigor Dimitrov was born in Haskovo, Bulgaria in May 1991. He turned professional in 2008 after winning Junior Grand Slam titles at Wimbledon and the US Open in 2008. Dimitrov is considered the most successful Bulgarian male tennis player of all time. He is the first Bulgarian player to earn over $1 million professionally. As of this writing he has earned $18 million in prize money during his career.

He reached the semifinals at Wimbledon in 2014 as well as at the Australian Open in 2017. He reached the third round at the 2019 French Open. Dimitrov won his first ATP title at the 2013 Stockholm Open and has won a total of six ATP titles. In 2012 he represented Bulgaria at the London Olympic Games and he also competed for his home country at the 2016 Rio Olympics. In 2014 Dimitrov was named the Bulgarian Sportsperson of the Year.

Grigor Dimitrov dated fellow tennis player Maria Sharapova from 2012 to 2015. He was at one time romantically linked to singer Nicole Scherzinger. 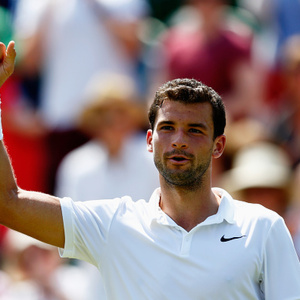