Gaël Monfils Net Worth: Gaël Monfils is a French professional tennis player who has a net worth of $10 million. Gaël Monfils was born in Paris, France, in 1986, and began playing tennis at a young age. In 2004, he became the top junior player in the world, winning the Boys' title at Wimbledon, the French Open, and the Australian Open all in the same year.

He began his professional career in 2004, and, as of 2014, has amassed a 300-178 singles record. Monfils' best ranking as a pro came in July of 2011 when he was the seventh-best player in the world. As of August 2014, he's currently ranked in the top 25. Monfils has appeared in the semifinals of the French Open once, in 2008, and the quarterfinals of the U.S. Open in 2010. He has yet to advance beyond the third round in Wimbledon or the fourth round of the Australian Open. He played in the 2008 Olympics as a singles player. Monfils has a 19-60 career record in doubles, never making it past the second round in any Grand Slam tournament. Nicknamed "La Monf" or "Sliderman", Monfils is an avid NBA fan who roots for the Denver Nuggets. He once appeared in a music video for Dragonette and Martin Solveig. Monfils currently lives in Trelex, Switzerland. 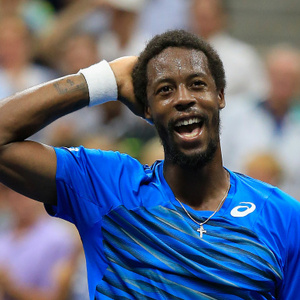