Gabriela Sabatini Net Worth: Gabriela Sabatini is a former Argentinian professional tennis player who has a net worth of $8 million dollars. Born in 1970 in Buenos Aires, Argentina, Gabriela Sabatini picked up tennis when she was six years old and won a tournament within two years. By the time she was 13, Sabatini was the youngest tennis player to ever win Miami's Orange Bowl. She went on to claim six international titles as a junior and was considered the top junior player in the world in 1984. Soon, she burst onto the scene by becoming one of the youngest women to ever reach the French Open semifinals a year later. In 1988, she faced off against Steffi Graf in the U.S. Open finals, losing in three sets. She took silver in the Summer Olympics that year and again lost to Graff, this time in straight sets. She and Graf joined forces and claimed the doubles championship at Wimbledon. Sabatini finally got her revenge on Graff in the U.S. Open finals in 1990, winning 6-2, 7-6, giving her the only Grand Slam title of her career. In 1994, she claimed the Year-End Championship title. In the late '80s, she attempted to capitalize on her tennis fame by releasing her own fragrance line. Sabatini retired from tennis in 1996 and was inducted into the International Tennis Hall of Fame a decade later. She finished with a 632-189 record, 27 titles, and a peak world ranking of three. 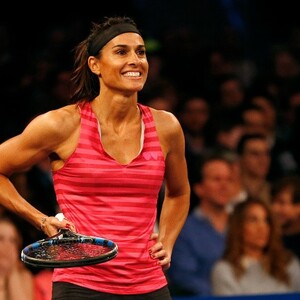