Flavia Pennetta net worth: Flavia Pennetta is an Italian professional tennis player who has a net worth of $7 million. Pennetta has won eleven career WTA singles titles, including the 2014 Indian Wells Premier Mandatory; and has also been a mainstay in the Fed Cup team competition, helping to win all four of Italy's titles in 2006, 2009, 2010, and 2013.

In doubles, Pennetta won her first Grand Slam title at the 2011 Australian Open with partner Gisela Dulko, and also reached the 2005 and 2014 US Open finals when she was partnered with Elena Dementieva and Martina Hingis, respectively. She was born in 1982 in Brindisi, Apulia, Italy and was introduced to tennis at the age of five by her father. At the age of seventeen, she won the 1999 French Open in girls' doubles with fellow Italian. Roberta Vinci, and went on to play on the International Tennis Federation (ITF) circuit in 1997.  Over the next eight years, Pennetta went on to create quite a successful career in tennis. At the 2015 US Open, Pennetta won her first ever major title, where she defeated fellow countrywoman Roberta Vinci in the first ever all-Italian final in the Open Era. After the match Pennetta announced her retirement at the end of the season. Currently, Pennetta is dating compatriot ATP tennis player, Fabio Fognini, but was previously in a relationship with Spanish tennis player, Carlos Moya. 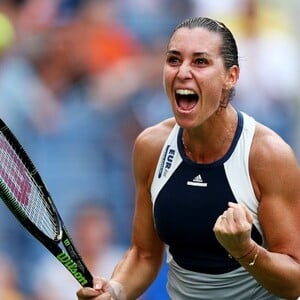