By the age of eight, he had a full-time coach. He turned professional in 2001. At the end of the season, he was ranked the world's no. 464. The following year, he won his first Futures Category title in Spain F1. By 2005, Verdasco was ranked number 32 in the world, after defeating tennis heavyweights Andy Roddick (twice) and Novak Djokovic. His Wimbledon Championship performance pushed his world ranking to number 13 in 2008. In the same year, Verdasco joined Andre Agassi's team, winning three Davies Cup titles in 2008, 2009 and 2011. Arguably Verdasco's best performance to date is making the semi-finals of the 2009 Australian Open, where he lost to current number five, Rafael Nadal. Verdasco's game with Nadal is recorded as the second longest match in Australian Open history, lasting five hours and 14 minutes. After this game, Verdasco was ranked in the top ten for the first time. Verdasco earned a career-high world ranking after a game with Novak Djokovic in 2009. 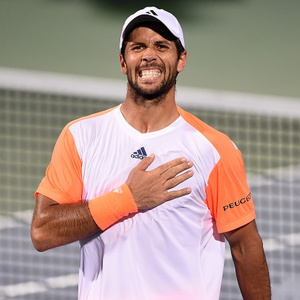