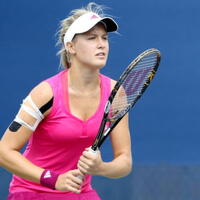 Eugenie Bouchard net worth: Eugenie Bouchard is a Canadian tennis player who has a net worth of $6 million. She was the first Canadian to win a Grand Slam in singles with her 2012 Wimbledon girls' title. In 2013, she was named WTA Newcomer of the Year, and at the 2014 Australian Open she became the second Canadian to reach the semifinals of a Grand Slam. Eugenie Bouchard was born in Montreal on February 25, 1994 and has a fraternal twin sister named Beatrice who is six minutes older. She started playing tennis at the age of five, and is a member of Tennis Canada's National Training Centre in Montreal. Bouchard moved to Florida at the age of 12 to be coached by Nick Saviano, but at 15 moved back to Montreal for training. She is a proficient student in mathematics and science and once considered a career as a physician. Bouchard's style is marked by the speed and tenacity with which she hits the ball. She is best known for hitting the ball extremely early, which imposes a severely high tempo on her opponents. She uses Babolat AeroProp Drive racquets and is sponsored by Nike.