Ernests Gulbis net worth: Ernests Gulbis is a Latvian professional tennis player who has a net worth of $4 million. Gulbis was born in Riga, Latvia in 1988. He started playing tennis at five years old after his grandmother brought him to a tennis court. Gulbis comes from an athletic family as his grandfather started on the former Soviet Union's national basketball team, and his two younger sisters both play tennis.

Ernests has won two titles in the 2014 season and is known for upsetting #4 ranked Roger Federer in the fourth round of the 2014 French Open. Gulbis comes from what is rumored to be the third wealthiest family is all of Latvia. As a child he did a bit of acting and appeared with his mother. As teenagers Gulbis trained with Novak Djokovic in Germany. He is also infamous for breaking tennis rackets. "I have to break at least one racket on every court in the world" said Gulbis. He has been criticized for saying that the likes of Djokovic, Nadal, Federer, and Murray give boring interviews. As of 2014 Ernests Gulbis has earned over $4 million in prize money. He has also played for Latvia in the Davis Cup since 2010. 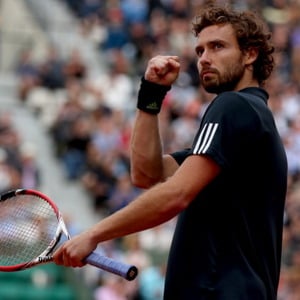