What is Emma Raducanu's Net Worth?

Emma Raducanu is a professional British tennis player who has a net worth of $5 million. Emma Raducanu made her WTA Tour debut in 2021. Among her achievements, she won the US Open just months after her debut, giving her the record for the fewest majors played prior to winning a title in the Open Era. Raducanu is also the first British woman to win a Grand Slam singles title since 1977, when Virginia Wade won at Wimbledon.

Emma Raducanu was born on November 13, 2002 in Toronto, Ontario, Canada to Chinese mother Renee and Romanian father Ion, both of whom work in finance. When she was two, Raducanu moved with her family to Bromley, England. As a young child there, she began playing tennis, and also participated in basketball, golf, ballet, skiing, and horse riding, among other sports. For her primary education, Raducanu went to Bickley Primary School and Newstead Wood School.

Raducanu began her junior tennis career with immediate success; in early 2018, she won the ITF Chandigarh Lawn Tennis tournament. Soon after this, she claimed titles at the ITF Grade-3 and the ITF Grade-2 junior tournaments in Chandigarh and New Delhi, respectively. Later in 2018, Raducanu made it to the girls' singles quarterfinals at both Wimbledon and the US Open. At the former, she beat Leylah Fernandez in the second round. After turning professional in late 2018, Raducanu alternated between junior and professional tournaments over the ensuing year.

Raducanu kicked off her professional playing career by competing at the Solapur Open in Maharashtra, India. Later, she won an event in Pune, India with a cash prize of $25,000. While many tennis events were suspended due to COVID-19 in 2020, Raducanu played in exhibition matches and small tournaments in the UK. In December, she won the Lawn Tennis Association LTA British Tour Masters title.

In 2021, Raducanu started training with coach Nigel Sears. She went on to make her WTA Tour debut at the Nottingham Open, where she lost to Harriet Dart in the first round. Shortly after this, Raducanu made her Grand Slam debut as a wildcard in the Wimbledon Championships. Defeating Vitalia Diatchenko and Markéta Vondroušová, she advanced to the third round, becoming the first British woman to do so at Wimbledon since Elena Baltacha in 2002. Raducanu subsequently beat Sorana Cîrstea to secure her placement in the fourth round; however, she retired in the second set due to breathing problems. 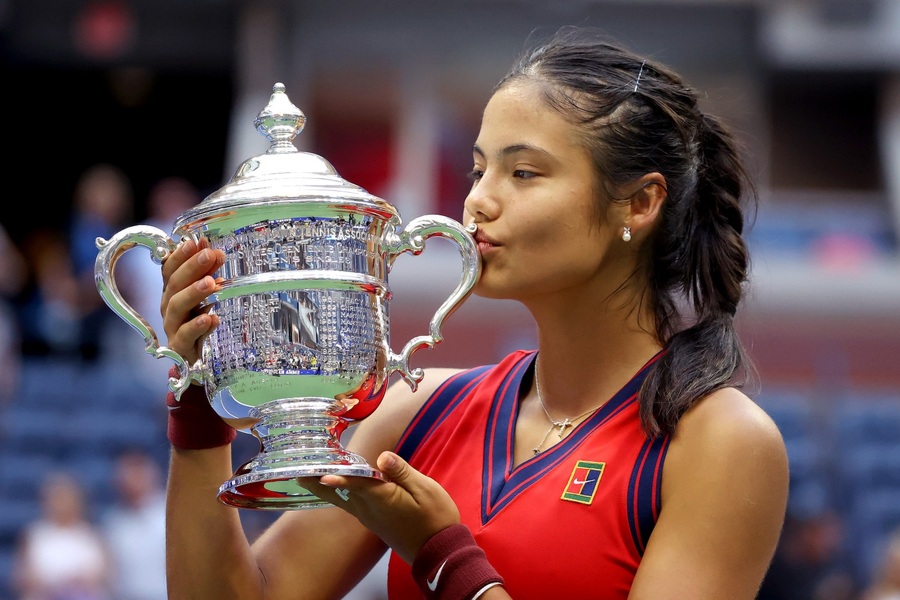 For the 2021 US Open Series, Raducanu changed her coach to Andrew Richardson. She then played in the first women's tournament of the series, the Silicon Valley Classic, ultimately losing in the first round to Zhang Shuai. Following this, Raducanu reached the final of the WTA 125 event in Chicago, Illinois; there, she lost to Clara Tauson. Entering as a qualifier at the US Open, Raducanu proved her mettle by defeating Bibiane Schoofs, Mariam Bolkvadze, and Mayar Sherif in straight sets. She continued her streak in the main draw, beating Stefanie Vögele, Zhang Shuai, Sara Sorribes Tormo, Shelby Rogers, Belinda Bencic, and Maria Sakkari. Advancing to the final, Raducanu gained over 100 ranking places to become British No. 1.

In the US Open final, Raducanu faced off against fellow teenager Leylah Fernandez. Ultimately, she beat her competitor in two sets without dropping a set to win the title. In the process, Raducanu became the first qualifier ever in the Open Era to win a Grand Slam title; the first woman ever in the Open Era to win the second major tournament she had entered; and the first British woman since Virginia Wade in 1977 to claim a Grand Slam singles title. Consequently, Raducanu rose to world No. 23 in the WTA rankings.

Following her incredible US Open victory, Raducanu played as a wildcard at the Indian Wells Open, losing in her first match. Next, she entered the Transylvania Open, and took her first WTA Tour victory by beating Polona Hercog. Raducanu advanced to the quarterfinals, but then lost in straight sets to Marta Kostyuk. She subsequently competed at the Linz Open, where she lost to Wang Xinyu in her round of 16 match. Raducanu finished her 2021 WTA Tour season ranked at world No. 19. She went on to partake in an exhibition match at the Champions Tennis event, where she won in two sets against Elena-Gabriela Ruse.

In 2022, Raducanu was scheduled to start her season at the Melbourne Summer Set, but had to drop out due to a recent COVID-19 diagnosis. Instead, she began the season at the Sydney International, where she lost in the first round to Elena Rybakina. Raducanu went on to make her debut at the Australian Open, defeating Sloane Stephens in the first round before falling to Danka Kovinić in the second. The following month, Raducanu rose to a new singles ranking of world No. 12. After retiring in the first round of the Abierto Zapopan and withdrawing from the Monterey Open, she made her second appearance at the Indian Wells Open. There, Raducanu was ultimately defeated by Petra Martić in the third round.

For her clothing and shoes, Raducanu is sponsored by Nike; her racquets, meanwhile, are sponsored by Wilson. Among her other endorsements, Raducanu is a brand ambassador for Dior and Tiffany & Co., as well as for British Airways, Vodafone, and Evian. 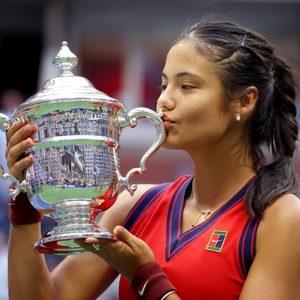