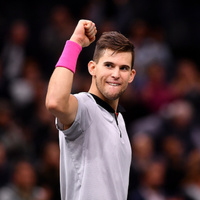 Dominic Thiem was born in Wiener Neustadt, Austria in September 1993. He turned professional in 2011 and has won more than $26 million prize money. Thiem was coached by Gunter Bresnik from 2002 to 2019 and Nicolas Massau starting in 2019. He achieved his highest career singles ranking in March 2020 at #3. Dominic Thiem's biggest win came at the 2020 US Open when he defeated Alexander Zverev in the final. Thiem reached the final of the Australian Open in 2020 and the French Open in 2018 and 2019. He reached the fourth round of Wimbledon in 2017 and the final of the Tour Finals in 2019. Dominic Thiem lost to Rafael Nadal at the French Open in 2018 and 2019 and to Novak Djokovic at the Australian Open in 2020.