What is Daniil Medvedev's Net Worth?

Daniil Medvedev is a professional tennis player from Russia who has a net worth of $16 million. Daniil Medvedev won multiple ATP Tour singles titles, including the 2021 US Open. Additionally, he has won multiple Masters 1000 titles and competed in many Grand Slam finals. In February of 2022, Medvedev became the first man outside of the "Big Four" in 18 years to rank No. 1 in the world by the ATP.

Daniil Medvedev was born on February 11, 1996 in Moscow, Russia to Olga and computer engineer Sergey. He has two older sisters named Julia and Elena. When Medvedev was six, his mother spotted an advertisement for group tennis lessons; he was subsequently encouraged to enroll by his father. In addition to tennis, he practiced guitar and harpsichord growing up. For his primary education, Medvedev studied math and physics at a specialized school. He went on to attend the Moscow State Institute of International Relations, but eventually dropped out to pursue his tennis career. Medvedev then enrolled at the Russian State University of Physical Education, Sport, Youth, and Tourism. Following this, he moved with his family to Antibes, France, where he trained at a tennis academy.

In the summer of 2009, Medvedev played his first junior tennis match at a tournament in Estonia. The next year, at only his third tournament, he won his first junior title. His breakthrough season came in 2012-13, when he won six titles. Medvedev also made his junior Grand Slam debut at Junior Wimbledon, and then competed at the Junior US Open. In early 2014, he made it to world No. 13 in the junior rankings. After a first-round loss at the 2014 Junior Wimbledon, Medvedev concluded his junior career.

Medvedev made his ATP debut in 2015 at the Kremlin Cup, where he partnered with Aslan Karatsev in the doubles event. The following year, he made his ATP singles debut at the Nice Open. Medvedev's first singles win on the ATP World Tour came three weeks later at the 2016 Ricoh Open. In early 2017, he made it to his first ATP singles final, where he lost to Roberto Bautista Agut. Later in the year, at the Wimbledon Championships, he notched his first Grand Slam match win by beating Stan Wawrinka.

Medvedev had a strong start to the 2018 season, winning the Sydney International final against Alex de Minaur. He went on to win his second ATP title at the Winston-Salem Open, and his first ATP 500 title in Tokyo. Medvedev concluded the 2018 season with the most hard court match wins of any ATP Tour player, with 38. He had another strong start the following season, making it to the final of the Brisbane International and the round of 16 of the Australian Open; however, he lost in both. Medvedev later won his fourth ATP title at the Sofia Open. He then had something of a breakthrough on the North American hard courts, reaching four tournament finals and earning his first Masters title. Following this success, Medvedev won the St. Petersburg Open on his own soil, becoming the first Russian player to win that competition in 15 years. He subsequently won a second straight Masters title in Shanghai. 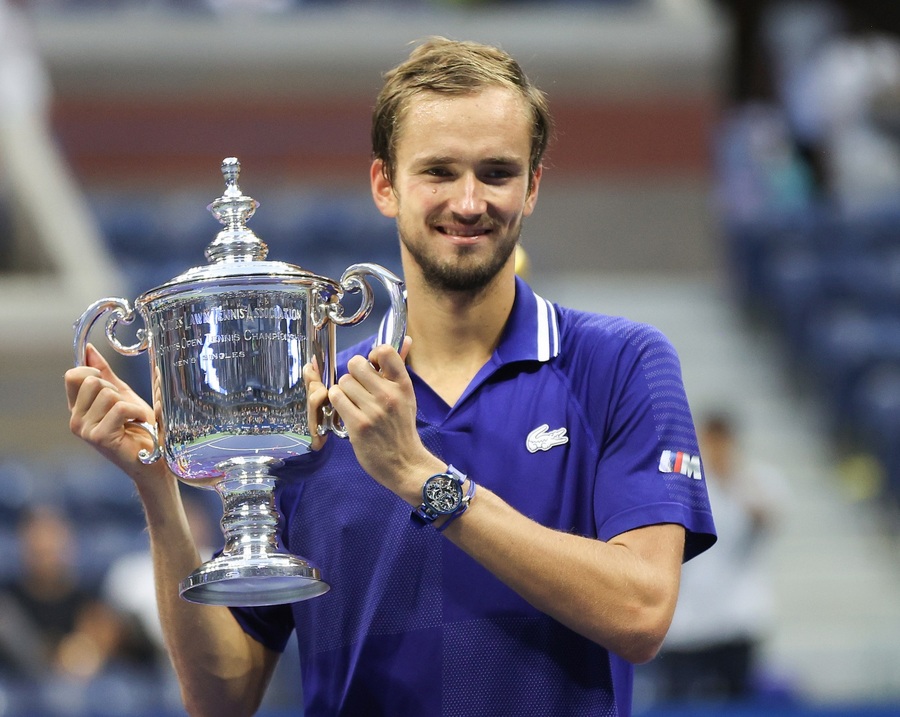 Medvedev initially struggled in 2020; at the Australian Open, he was eliminated in the fourth round, and in Rotterdam and Marseille he experienced early defeats indoors. He also lost at the Cincinnati Masters, and exited the French Open in the first round for the fourth straight year. Medvedev bounced back later in the year to win the Paris Masters. Even better, he swept the ATP Finals against Alexander Zverev, Diego Schwartzman, and Novak Djokovic. In the process, Medvedev became the first player ever to beat the world's top three players in the ATP Finals. His success continued in 2021, when he reached his second Grand Slam final at the Australian Open; ultimately, he lost there to Djokovic. Medvedev's first title of the season came at the Open 13, after which he ascended to world No. 2 in the ATP rankings. He went on to win the Canadian Open and the US Open, the latter being his first Grand Slam singles title. Additionally, Medvedev helped lead Russia to the Davis Cup title to end the season.

In January of 2022, Medvedev reached the Australian Open final for the second straight year; he was ultimately defeated by Rafael Nadal in five sets. Next, he entered the Mexican Open, where he was once again defeated by Nadal. Despite this, Medvedev secured the world No. 1 ranking from Djokovic, who had lost in the Dubai quarterfinals. However, he was bumped back down to No. 2 in March after losing the Indian Wells Masters.

In 2018, Medvedev wed his girlfriend Daria Chernyshkova, a former junior tennis player and graduate of Moscow State University. He credits her with improving his tennis scores. Notably, Chernyshkova serves as Medvedev's assistant, helping him get travel visas to compete around the world.

As a major athlete, Medvedev has done a number of endorsements for companies. He has promoted Lacoste apparel, Tecnifibre racquets, and Bovet watches. Medvedev has also served as a brand ambassador for BMW, Tinkoff Bank, and the HyperX gaming division of Kingston Technology Corporation. 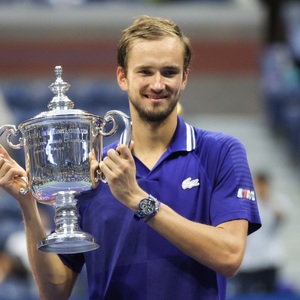