What is Coco Gauff's Net Worth?

Cori Gauff, better known as Coco Gauff, is an American tennis player who has a net worth of $3.5 million. Coco Gauff first became internationally well-known after she beat Venus Williams at the 2019 Wimbledon tournament. She was 15 years old when she beat Venus. Going into the tournament, Coco's total career earnings were $75,000. With the win and another subsequent win, she guaranteed herself at least $140,000 from this one event alone. Coco is the youngest finalist in the history of the US Open singles event. She is the youngest person to win the Junior French Open. She is the youngest player to qualify for the main draw at Wimbledon.

In October 2018 she signed an endorsement deal with New Balance. In March 2019 she signed a multi-year contract with pasta company Barilla. She also has a deal with racquet maker Head. Coco Guaff earned at least $1 million, primarily from endorsements, in 2019.

Coco Gauff was born as Cori Gauff on March 13, 2004 in Atlanta, Georgia to Candi and Corey, both former college athletes. Her father played basketball at Georgia State University, while her mother did track and field at Florida State University. Gauff has two younger brothers named Codey and Cameron. Growing up, she became interested in tennis when she saw Serena Williams win the 2009 Australian Open on TV. Gauff began playing the sport at the age of six, and realized she wanted to pursue it as her career. To have better opportunities for training, she moved with her family to Delray Beach, Florida, where her parents are from. Gauff trained at the New Generation Tennis Academy under Gerard Loglo beginning when she was eight.

Gauff's parents eventually dropped their careers so they could devote their time to training their daughter. Her father soon became her coach, while her mother homeschooled her. When she was ten, Gauff started training at the Mouratoglou Academy in France under Patrick Mouratoglou, the longtime coach of Serena Williams. Gauff went on to win the USTA Clay Court National 12-and-under title, making her the youngest winner in that tournament's history at just ten years of age.

At the age of 12 in 2016, Gauff entered the Les Petits As 14-and-under tournament, ultimately making it to the semifinals. The next year, she made her debut on the ITF Junior Circuit. Jumping directly to the highest-level tournaments, she came in second place to Jaimee Fourlis in the Grade 1 Prince George's County Junior Tennis Championships. Gauff followed this with her junior Grand Slam debut at the 2017 US Open, where she came in second to Amanda Anisimova. In 2018, she reached the semifinal at the Grade 1 Traralgon Junior International, but lost her opening round match at the Australian Open. Gauff bounced back for the French Open, winning her first career junior Grand Slam title in singles. After her subsequent win at the Grade 1 Junior International Roehampton, Gauff rose in the ranks to No. 1 junior in the world. For the final pair of Grand Slam tournaments in 2018, she made it to the quarterfinals in singles. Even better, Gauff reached the semifinals in doubles at Wimbledon and claimed her first career junior Grand Slam doubles title at the US Open. She capped off her successful season with further wins at the Junior Fed Cup and the Orange Bowl.

In May of 2018, Gauff made her debut on the ITF Women's Circuit and won her first professional match at Osprey. She began the next year by coming in second in doubles at the Midland Tennis Classic and reaching the finals in both singles and doubles at Surprise. There, playing alongside Paige Hourigan, Gauff claimed her maiden WTA title in doubles. A little later, she made her WTA Tour main draw debut at the Miami Open, winning her opening match. Gauff went on to qualify for the main draw at Wimbledon, making her the youngest player in tournament history to do so. In the first qualifying round, she upset Aliona Bolsova, and in the third and final qualifying round beat Greet Minnen. Gauff then upset Venus Williams in her main draw debut before making it to the fourth round.

Following her Wimbledon success, Gauff won the doubles event at the Washington Open with Caty McNally. She went on to claim her first WTA singles title at the Linz Open, in the process becoming the youngest WTA player to win in singles in 15 years. Gauff concluded the season by winning another WTA doubles title with McNally at the Luxembourg Open.

Gauff began 2020 by making it to the second round in singles and the semifinals in doubles at the Auckland Open. Next, at the Australian Open, she made it to the fourth round in singles; notably, she beat defending champion Naomi Osaka in the third round. Gauff finished her 2020 season with a wildcard into the qualifying draw of the Ostrava Open, where she ultimately fell in the second round to Aryna Sabalenka. In early 2021, Gauff entered the Abu Dhabi Open, Yarra Valley Classic, and Dubai Championships, having varying levels of success. A highlight of the year came when she made it to the semifinal at the Italian Open, and shortly after won singles and doubles titles at the Emilia-Romagna Open. Gauff continued her success at the French Open, where she reached her first Grand Slam quarterfinal. Later in the year, at the US Open, she made it to her first Grand Slam final in the doubles event with McNally.

In early 2022, Gauff claimed her first WTA 1000 doubles title with Jessica Pegula at the Qatar Open. She subsequently reached the semifinals in both singles and doubles at the French Open. As a result of her success, Gauff climbed to career-high world rankings of No. 15 in singles and No. 7 in doubles. 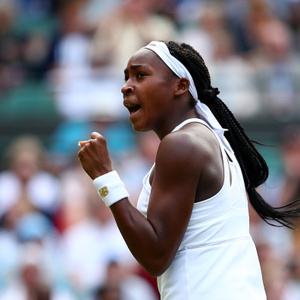