What is Chris Evert's Net Worth and Career Earnings?

Chris Evert is a retired American world number one professional tennis player who has a net worth of $16 million. Chris Evert won 18 Grand Slam singles championships and was world No. 1 for several years. Among her many records, she reached more Grand Slam singles finals than any other player in professional tennis history, with 34, and posted the most consecutive years of winning at least one Major title, with 13. Beyond her playing, Evert served as the president of the Women's Tennis Association for 11 years. She won a record seven championships at the French Open and a record six championships at the U.S. Open. She was a five time year-ending World No. 1 singles player in 1975, 1976, 1977, 1980, and 1981.

Her lifetime career win–loss record is 1309–146 (89.96%) in singles matches. That's the best record of any professional player man or woman in the Open Era. Chris Evert was a favorite on the clay courts. Her win loss rate of 94.05% (316/20) remains a WTA record. Tennis writer Steve Flink wrote a book naming Evert as the third best female player of the 20th century, after Steffi Graf and Martina Navratilova. During Evert's career she never lost in the first or second rounds of a Grand Slam singles tournament.

Today she operates a tennis academy in Boca Raton, Florida. She also helps coach the Saint Andrew's high school tennis team. She has been a contributor to Tennis Magazine since 2009, and also tennis on ESPN since June 2011.

Chris Evert was born on December 21, 1954 in Fort Lauderdale, Florida to Colette and Jimmy. She has four siblings: sisters Jeanne and Clare and brothers John and Drew. When she was just five years old, Evert started taking tennis lessons from her father, who was a professional coach. As a teen, she went to St. Thomas Aquinas High School. During this time, in 1969, Evert became the No. 1 ranked under-14 girl in the country. The same year, she played her first senior tournament, reaching the semifinals against Mary-Ann Eisel. In 1970, Evert won the national 16-and-under championship, and was subsequently invited to compete in an eight-player tournament in North Carolina. There, she beat Françoise Dürr; even most significantly, she defeated world No. 1 player Margaret Court. As a result, Evert was selected to the US Wightman Cup team as the youngest player in competition history. 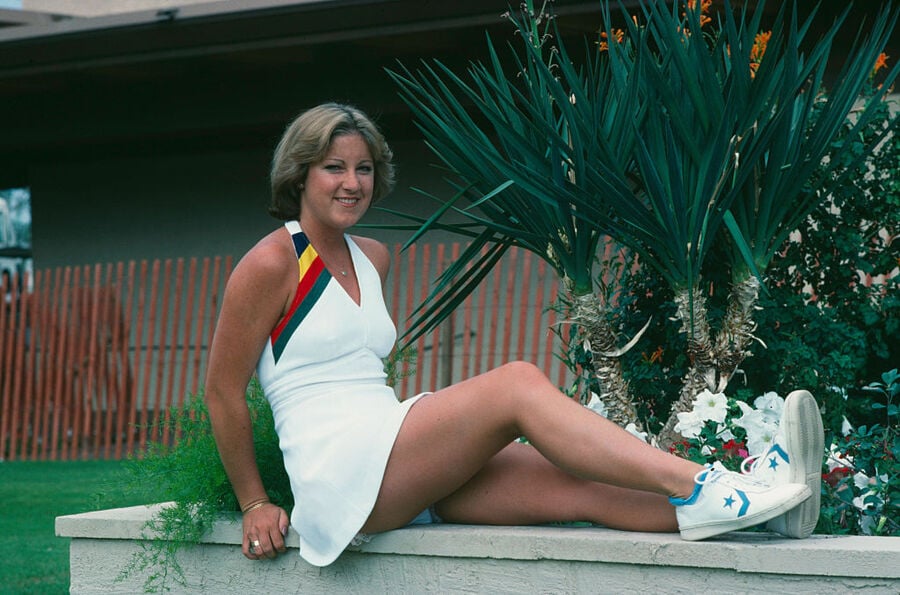 At only 16 years of age, Evert made her Grand Slam tournament debut at the 1971 US Open. Reaching the semifinals, she ultimately fell to Billie Jean King in straight sets. A couple years later, Evert was the runner-up at both the French Open and the Wimbledon Championships. The year after that, Evert won both of those events as part of her record 55-consecutive-match winning streak. She finished the year with a 100-7 match record, having won 16 tournaments including two Grand Slams. Evert went on to achieve the world No. 1 rank for the ensuing five years. In 1975, she won her second French Open and first of four consecutive US Open titles.

Due to her dominant performance and stoic demeanor, Evert earned the moniker "Ice Maiden." She continued her success in 1976, one of the best years of her professional career in that it was the only time she won both Wimbledon and the US Open titles in the same year. Evert extended her dominance through 1977 and 1978, winning two further US Open titles and finishing with a 126-7 match record. Although experienced on all surfaces, she was particularly exceptional on clay courts, having won 125 straight matches on that surface. Moreover, Evert holds the record for the most Grand Slam titles, 10, played on clay.

Among her greatest accomplishments in the 80s, Evert beat Martina Navratilova at the 1986 French Open, giving her her final Grand Slam title. Two years later at the Australian Open, she once again defeated Navratilova to make it to her record 34th and last Grand Slam final.

In 1989, Evert retired from professional tennis following the US Open. She finished her career having won a record 18 Grand Slam singles titles, including a record seven at the French Open and six at the US Open. Meanwhile, her record of 101-13 at the US Open represents the most singles match wins in history. Evert also holds the record for the highest winning percentage in singles matches in the history of the Open Era, with 90.00%. Additionally, her 94.55% winning percentage in singles matches on clay courts is a WTA record.

A baseline player, Evert is often credited with revolutionizing tennis. She was known for her counterpunching game, and was one of the first players to play entirely from the baseline. On top of this, Evert was one of the first women to successfully use a double-handed backhand on the WTA tour. She also had an incredibly effective drop shot, and was especially adept with her footwork, coverage of the court, and mental stamina.

During her professional career, Chris Evert earned a little under $9 million in tournament prize money. After adjusting for inflation, that's the same as around $30 million in today's dollars. She also earned several million dollars from endorsement deals. 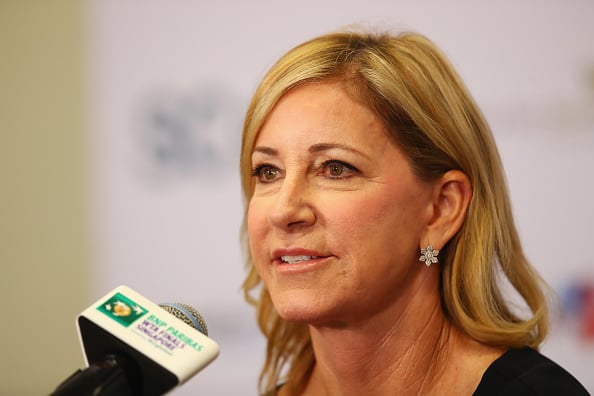 In Boca Raton, Florida, Evert owns the Event Tennis Academy with her brother John. She also helps coach the high school tennis team of Saint Andrew's School, and both publishes and contributes to Tennis magazine. In 2011, Evert became a tennis commentator for Grand Slam tournaments on ESPN. Four years later, she launched a line of tennis apparel and other activewear called Chrissie by Tail.

When she was on her professional hot streak in the 70s, Evert had a heavily publicized romance with fellow top tennis player Jimmy Connors; the two occasionally played together on mixed doubles teams. At the age of 19, Evert got engaged to Connors; however, the relationship fell apart and the wedding was called off.

In 1979, Evert married her first husband, British tennis player John Lloyd. The relationship suffered due to Evert's affair with British singer Adam Faith, leading to a separation. Eventually, however, Evert and Lloyd reconciled, before ultimately divorcing in 1987. The following year, Evert married downhill skier Andy Mill; they had three sons named Alexander, Nicholas, and Colton, and ended up divorcing in 2006. Two years after that, Evert wed her third husband, Australian golfer Greg Norman. After 15 months, the pair split, and finally divorced in December of 2009. 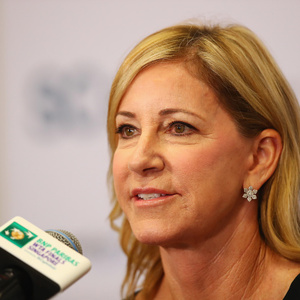