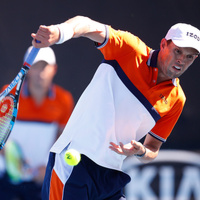 Bob Bryan net worth: Bob Bryan is American tennis player who has a net worth of $10 million dollars. Born in Camarillo, California, Bob Bryan graduated from Stanford University. Though a quite successful junior and collegiate singles player, including winning the NCAA singles title in 1998, he is best known for his doubles play with his twin brother, Mike Bryan. The two players have set multiple doubles records, including winning 76 ATP Tournaments, remaining at #1 in Doubles for 287 weeks, reaching the finals at 7 consecutive Grand Slam events, and reaching 20 Grand Slam finals overall. They have won the Doubles title at the Australian Open five times, at the French Open once, at Wimbledon twice, and at the U.S. Open three times. In Mixed Doubles, he has also won the title four times at the US Open, twice at the French Open, and once at Wimbledon. He and his brother won the Gold Medal at the 2012 Olympics in London.