Bjorn Borg net worth: Bjorn Borg is a Swedish tennis player who has a net worth is $40 million dollars. Bjorn Borg is the first man to win 11 Grand Slam singles titles – six at the French Open and five consecutive title at Wimbledon.

Early Life: Borg was born on June 6, 1956 in Stockholm, Sweden. He was the only child of parents Rune and Margaretha Borg, who raised their son in Södertälje. His father had won a tennis racket at a table-tennis tournament, which Borg was fascinated with as a child. He father gave Borg the racket when he was only a child, starting his tennis career.

Even as a young player, Borg's skill was evident. He was very athletic and moved quickly, while also being muscular. He developed a strong two-handed backhand and was beating the best of Sweden's under-18 players by the time he was 13.

Professional Career: When Borg was 15, he represented Sweden in the 1972 Davis Cup and won his debut singles match. The same year, he also won the Wimbledon junior singles title followed by the Orange Bowl Junior Championship. The following year, in 1973, Borg joined the professional circuit. At his first French Open, he reached the fourth round and he reached the quarterfinal at his first Wimbledon Championship the same year. He finished the year ranked number 18 among professional men's singles players.

In 1974, he won his first career singles title at the New Zealand Open, followed quickly by titles in London and Sāo Paulo. In June of 1974, he became the youngest winner of the Italian Open, his first top-level singles title. He then won the French Open two weeks later, his first Grand Slam tournament title. At the time, Berg was only 18 and the youngest-ever male French Open champion. The following year, he retained his French Open title by defeating Guillermo Vilas in straight sets.

In 1976, Borg won the World Championship Tennis competition, though he lost the French Open that year to Adriano Panatta. However, Borg did win at Wimbledon in 1976, becoming the youngest male champion in the modern era at the time. He won at Wimbledon again in 1977, propelling Borg to earn the number 1 ranking in the ATP point system. He only officially held onto the top spot for a week though, as a shoulder injury forced him to drop out of the playing circuit to recover.

In 1978, Borg's shoulder had healed and he again won the French Open, not dropping a set during the tournament. He also won at Wimbledon that year, beating Jimmy Connors in straight sets. The following year, he again won both at the French Open and at Wimbledon, ending the year at number one in the ATP point rankings. 1980 was another strong year for Borg, as he won his fifth French Open title and his fifth consecutive Wimbledon singles title, defeating John McEnroe in a final that is widely considered to be the best Wimbledon final ever played. McEnroe did beat Borg the same year in the final at the U.S. Open.

In 1981, Borg won his last Grand Slam title at the French Open. Having won six French Open titles, Borg's record at the tournament has only been better by Rafael Nadal. However, he lost to McEnroe at Wimbledon the same year and later remarked that this loss signaled a shift in his desire to continue playing the game. In 1982, Borg only played in one tournament, Monte Carlo, which he lost to Yannick Noah.

Borg officially announced his retirement in 1983 at the age of 26. The news shocked the tennis world, with McEnroe specifically attempting to persuade Borg to keep playing in order to continue their rivalry. Borg was not convinced however, though he did attempt a comeback from 1991 to 1993 that was largely unsuccessful.

Borg is still considered to be one of the greatest tennis players of all time. He had a very distinctive playing style and unparalleled fitness. He could outlast most of his opponents and generally played in a more dominant and aggressive style. He is credited with helping develop the style of play that dominates tennis today. In addition to his physical prowess, Borg also had a reputation for being extremely calm under pressure, inspiring the nicknames of "Ice Man" or "Ice-Borg."

In his career, Borg won a total of 77 top-level singles titles and four doubles titles. He was inducted into the International Tennis Hall of Fame in 1987 and was elected Sweden's top sportsperson of all time by the Swedish newspaper, Dagens Nyheter.

Personal Life: Borg began dating professional Romanian tennis player, Mariana Simionescu, in 1976. They married in Bucharest, Romania on July 24, 1980. They remained together for four years until divorcing in 1984. In 1985, he had a child, Robin, with Swedish model Jannike Björling. He later began a relationship with Italian singer Loredana Bertè and the two married in 1989. They then divorced in 1993. In June of 2002, Borg married his third wife, Patricia Ostfeld. They had a son together, Leo, in 2003. Following his tennis career, Borg launched Björn Borg fashion label, which became very successful in Sweden. 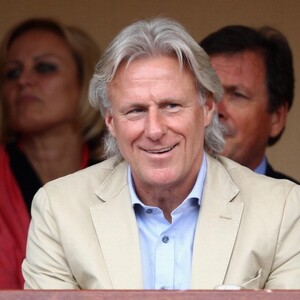