What is Billie Jean King's Net Worth?

Billie Jean King is an American retired World No. 1 professional tennis player who has a net worth of $20 million. Considered one of the best tennis players of all time, King won 39 Grand Slam titles: 12 singles, 11 mixed doubles, and 16 women's doubles. She also took the singles title at the inaugural WTA Tour Championships.

During her career, Billie Jean represented the U.S. in the Federation Cup and Wightman Cup several times, and she was a member of the U.S. team when it won nine Wightman Cups and seven Federation Cups. A vocal advocate for gender equality, 29-year-old King won the so-called "Battle of the Sexes" tennis match against 55-year-old Bobby Riggs in 1973. Billie Jean founded the Women's Sports Foundation and the Women's Tennis Association, and she served as the U.S. captain in the Federation Cup for three years.

In September 2018, Billie Jean and her wife, Ilana Kloss, became minority owners of the Los Angeles Dodgers. King's brother, Randy Moffitt, was a professional baseball player who pitched 12 seasons for the San Francisco Giants. When Billie Jean attends Dodgers games today, she wears a Dodgers jersey with the number 17 to honor her brother. That was the number he chose for his jersey during his playing days. He chose that number because he was passed over by 17 teams in the MLB draft.

Billie Jean and Randy grew up Dodgers fans as residents of Long Beach, California, during their childhood. King was angry at the Dodgers for many years for passing over her brother in the draft. When he was playing for the Giants, she became a Giants fan. Today she is, obviously, a Dodger fan again. King and Kloss are also minority owners of the Los Angeles Sparks WNBA team. 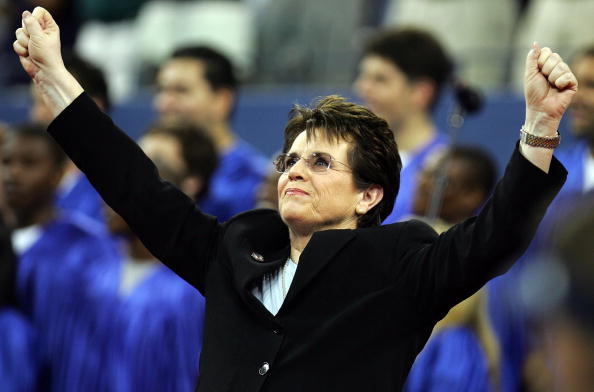 Billie Jean King was born Billie Jean Moffitt on November 22, 1943, in Long Beach, California. She grew up in a conservative Methodist household with mother Betty (a homemaker), father Bill (a firefighter), and younger brother Randy. Billie Jean played basketball and softball during her youth, and at age 10, she played shortstop on a team that won the Long Beach softball championship. She began playing tennis at age 11 after her parents suggested that she play a more "ladylike" sport, and she bought her first racket with $8 she had saved up. King took free lessons from tennis professional Clyde Walker on Long Beach's free public courts, and one of those courts was later renamed the Billie Jean Moffitt King Tennis Center. Billie Jean attended Long Beach Polytechnic High School, then she enrolled at Los Angeles State College (which is now known as California State University, Los Angeles). She left college in 1964 to focus on her tennis career. Her family attended the Church of the Brethren, and when King was a teenager, the minister, former Olympic champion Bob Richards, asked her what she wanted to do with her life. Billie Jean replied, "Reverend, I'm going to be the best tennis player in the world."

In 1972, she won Wimbledon, the U.S. Open, and the French Open, and the following year, she defeated Bobby Riggs in the "Battle of the Sexes," which was watched by 90 million people in more than 35 countries. That year Billie Jean's then-husband, Larry, co-founded World TeamTennis (WTT), a mixed-gender tennis league, and King recruited the female players for the league. Elton John wrote the song "Philadelphia Freedom" as a theme song for the WTT team Billie Jean played on, the Philadelphia Freedoms.

In 1984, King became the Commissioner of WTT after retiring from competitive tennis, making her the first female commissioner in the history of sports, and she also became one of the league's owners. She served as Commissioner until 2001. In 1992, King and Elton John co-founded World TeamTennis Smash Hits, an "annual all-star charity tennis match" that benefits the Elton John AIDS Foundation. After her retirement, Billie Jean served as the captain of the U.S. Fed Cup team, and she coached its women's Olympic tennis team. In 2013, she was named to the Presidential Delegation to the 2014 Winter Olympics in Sochi, Russia, but she had to drop out because her mother was ill; Betty passed away the day of the opening ceremonies. In 2020, the Fed Cup was renamed the Billie Jean King Cup, and International Tennis Federation president David Haggerty said of the honor, "All major team competitions, including Davis Cup, are named after men, and we think it's really fitting that the women's world cup of tennis would be named after someone as iconic as Billie Jean King, who changed the face of women's sports."

Billie Jean married attorney Larry King on September 17, 1965. A few years later, King realized that she was attracted to women and became involved with her secretary, Marilyn Barnett.  Marilyn lived in the Kings' Malibu home rent-free, and when they asked her to move out in 1979, she threatened to leak letters that Billie Jean had written to her. When the leak attempt failed, Barnett sued the couple for half of their income as well as their Malibu home. King and Barnett's relationship eventually became public knowledge in 1981 when Marilyn filed a palimony lawsuit against her, resulting in Billie Jean losing approximately $2 million in endorsements. The palimony suit was later thrown out. In a 1972 "Ms." magazine article, Larry revealed (without Billie Jean's knowledge) that the tennis star had an abortion the previous year. King spoke of her decision in a 2018 interview with "Makers," stating, "The reason I had an abortion is because I was not in a good place. I was just finding out about my sexuality, I was trying to figure my life out, I was trying to get the tour started, I just did not want to bring a baby into the world." Billie Jean and Larry divorced in 1987 after King fell in love with Ilana Kloss, her doubles partner. She married Kloss on October 18, 2018, and the ceremony was performed by former New York City Mayor David Dinkins.

King is known for advocating for equal prize money in men's and women's tennis games, and after Larry came up with the idea of a nine-player women's tennis group (dubbed the "Original 9"), Billie Jean became the first female athlete to win more than $100,000 in prize money. However, when she won the 1972 U.S. Open, the male champion, Ilie Năstase, received $15,000 more than she did. Billie Jean refused to take part in 1973's U.S. Open unless the prize money was equal, and the tournament's organizers complied with her wishes. The "Original 9" embarked on the Virginia Slims Circuit, the first professional all-women tennis tour, in 1970, and by the end of the year, the "Original 9" had grown to 40 members. King became president of the Women's Tennis Association in 1973, and in 1974, she co-founded "womenSports" magazine. Billie Jean has served on the Sports Museum of America's Board of Honorary Trustees, and the museum houses the Billie Jean King International Women's Sports Center. In 2021, she became an advisor to Chicago's First Women's Bank.

In 1967, King was named the Associated Press Female Athlete of the Year, and in 1972, she became the first tennis player and first female athlete to be named "Sports Illustrated" Sportsman of the Year. In 1990, she was included in "Life" magazine's "100 Most Important Americans of the 20th Century" list, and in 1999, she received the Arthur Ashe Courage Award and was inducted into the Chicago Gay and Lesbian Hall of Fame. In 2000, the Gay & Lesbian Alliance Against Defamation (GLAAD) honored Billie Jean with an award for "furthering the visibility and inclusion of the community in her work." 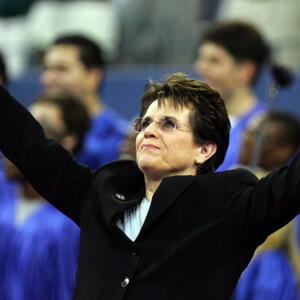