Bianca Andreescu net worth: Bianca Andreescu is a Canadian professional tennis player who has a net worth of $4 million. Bianca Andreescu was born in Mississauga, Ontario, Canada in June 2000. She turned pro in 2017 and has made more than $6 million in prize money. Andreescu's biggest win came at the 2019 US Open where she defeated Serena Williams in the final.

She made it to the second round of the Australian Open and French Open in 2019 and did not advance out of the first round in the 2017 Wimbledon. Bianca Andreescu competed in the 2019 US Open Grand Slam Doubles but did not make it out of the first round. She won the Canadian Open in 2019 also defeating Serena Williams. Bianca Andreescu also won the Indian Wells Open in 2019 defeating Angelique Kerber. When she won the 2019 US Open she became the first player born in the 2000s and the first Canadian player to win a Grand Slam singles title. 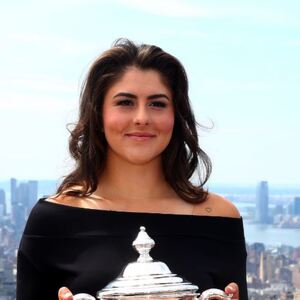