Arthur Ashe net worth: Arthur Ashe was an American professional tennis player who had a net worth of $4 million. Arthur Ashe was born in Richmond, Virginia in July 1943 and passed away in February 1993. Ashe turned professional in 1970 and retired in 1980. According to the ATP me made just over $1.5 million in career prize money. Ashe was the first black player to be selected to the United States Davis Cup team. He was also the first and only black man to win singles titles at Wimbledon, the Australian Open, and the US Open. Ashe was ranked #1 in 1968 by Harry Hopman and again in 1975 by World Tennis Magazine. He was ranked #2 in the ATP computer rankings in 1976. He won the US Open in 1968, the Australian Open in 1970, and Wimbledon in 1975. As a doubles player he also won the French Open in 1971 and the Australian Open in 1977 and reached the finals of Wimbledon in 1971 and the US Open in 1968. Ashe also won four Davis Cups. It is believed that Ashe contracted HIV from a blood transfusion during heart bypass surgery. He founded the Arthur Ashe Foundation for the Defeat of AIDS and the Arthur Ashe Institute for Urban Health. He was posthumously awarded the Presidential Medal of Freedom by President Bill Clinton in 1993. Arthur Ashe passed away on February 6, 1993 at 49 years old from AIDS related pneumonia. 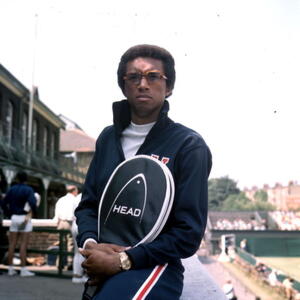