What is Anna Kournikova's net worth and career earnings?

Anna Kournikova is a Russian-American retired professional tennis player who has a net worth of $60 million. Anna Kournikova may not have ever won a WTA singles title, but that didn't stop her from becoming one of the most famous female tennis players in the world. And while she earned less than $4 million in career prize money, she earned tens of millions from endorsement deals.

Anna Kournikova was born on June 7, 1981 in Moscow Russia. She came from an athletic family: Her father Sergei was a former Greco-Roman wrestling champion and her mother Alla was a 400-metre runner, while her brother Allan is a world golf champion. At the age of five, Anna received her first tennis racquet as a gift. She swiftly joined the Spartak Tennis Club shortly after and began appearing in junior tournaments by the age of eight. In 1990, at the age of nine, Kournikova began attracting attention from tennis scouts all over the world and subsequently snagged a management deal to train at Nick Bollettieri's prestigious tennis academy in Bradenton, Florida.

Kournikova quickly became popular on the tennis scene after her arrival in the U.S. At the age of 14, she won both the Italian Open junior tournament and the European Championships. In 1995, she became the youngest player to win the Junior Orange Bowl tournament and was also crowned the ITF Junior World Champion. Still at the age of 14, she debuted in the WTA Tour and debuted at the Fed Cup for Russia where she was the youngest player ever to participate and win a match. In 1996, she began a six-year tenure with a new coach, Ed Nagel, which would produce her most successful results. Kournikova earned a spot on the Russian team at the 1996 Olympic Games in Atlanta, Georgia. She entered the 1997 Australian Open at a world ranking of No. 67. At the US Open that year, she lost to eventual champion Martina Hingis.

Anna reached the peak of her career playing doubles, where she had at times been a World No. 1 player. Along with her partner Martina Hingis, Kournikova won Grand Slam doubles titles in Australia in 1999 and 2002. They often referred to themselves as the "Spice Girls of Tennis". At Wimbledon 1999, Kournikova lost to Venus Williams in round four. She partnered with Jonas Bjorkman to reach the final in mixed doubles and ended the season ranked World No. 12. In November 1999, Anna ended her season in the World No. 1 ranking in doubles. At the Australian Open in 200, Anna broke into the top 10 for the first time in singles when she reached the No. 8 spot in the world. Unfortunately, her 2001 season took a turn as it was plagued by injuries including a left foot stress fracture that forced her to withdraw from 12 tournaments including Wimbledon and the French Open. At the end of the season, she was ranked No. 74 in singles and No. 26 in doubles.

Kournikova bounced back in 2002 when she reached the final at the China Open (losing to Anna Smashnova), in her last singles final. Coupled up with Martina Hingis, they lost the final at Sydney but the pair won their second Grand Slam title together at the Australian Open. Kournikova paired with Chanda Rubin in the semi-finals of Wimbledon but they lost to Serena and Venus Williams. At the end of 2002, she was ranked No. 35 in singles and No. 11 in doubles. Kournikova earned her first Grand Slam match victory in two years at the Australian Open in 2003, defeating Henrieta Nagyova in the first round. She withdrew from Tokyo due to a sprained back and did not return. 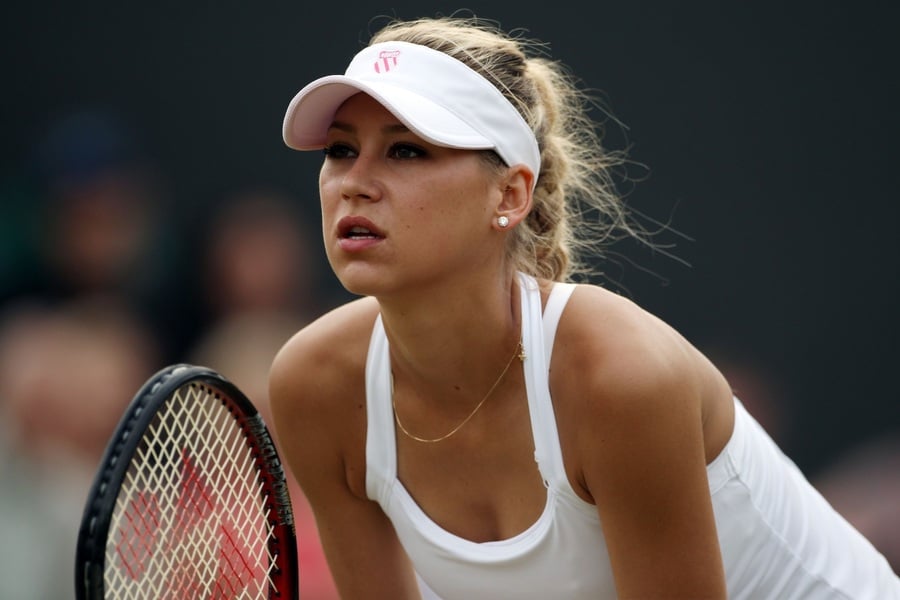 Anna ended her professional tennis career prematurely at the age of 21 due to serious back and spinal problems. At the end of 2003 and her professional career, she was ranked No. 305 in singles and No. 176 in doubles. She won 16 tournament doubles titles and her singles record is 209-129. During her playing days, Anna was one of the most sought after female endorsers in the world. In 2000, she became the face of Berlei's shock absorber sports bras with her photo plastered on billboards worldwide. She now resides in Miami Beach, Florida, and sometimes plays in charity exhibitions and doubles for the St. Louis Aces of World Team Tennis. In addition to her tennis and TV work, she is also a Global Ambassador for Population Services International's Five & Alive program which is dedicated to health crises facing children under the age of five and their families. Her total career prize money earnings stands at $3,584,662.

Some of Kournikova's fame came from the media hyping her looks and personal life when she was 15 years old and a new resident of the U.S. She began appearing in numerous magazines worldwide as her fame grew. She appeared in 2004's highly publicized Sports Illustrated Swimsuit Issue, as well as FHM and Maxim. She was cast in a minor role in the 2000 Farrelly brothers flick "Me, Myself, & Irene". In 2010, Anna appeared on NBC's "The Biggest Loser" where she led contestants in a tennis-workout challenge. She joined the show as a regular celebrity trainer in season 12 but did not return for season 13.

Anna Kournikova became a United States citizen in 2010. Anna has been dating singer Enrique Iglesias since 2001. They met when she appeared in his music video for "Escape." They reportedly split in 2013 but have since reconciled. Anna and Enrique have remained famously tight-lipped on the status of their relationship and consistently refuse to direct or deny whether or not they are legally married. The couple owns a $20 million dollar home on a private island in Miami where they live with their three children, twins Nicholas and Lucy (b. December 2017) and a daughter born in January 2020.