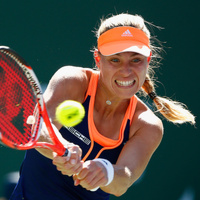 Angelique Kerber net worth, salary and career earnings: Angelique Kerber is a German professional tennis player who has a net worth of $30 million dollars. Angelique Kerber was born on January 18, 1988 in Poland. She grew up in Kiel, Germany. She started playing tennis at age three. In 2012, she moved back to Poland to train at an indoor tennis facility owned by her maternal grandfather. She never won a junior title and decided to turn pro in 2003 at the age of 15. As a professional she has won 11 WTA titles and reached the #1 ranking in the world in September 2016. During her career she has earned over $25 million on the court alone and millions more from endorsements. Angelique Kerber's sponsors include Adidas for clothing, Yonex for racquets as well as general sponsorships with Rolex, SAP, Porsche and insurance conglomerate Generali. Between June 2017 and June 2018, she earned roughly $13 million from endorsements and on-court earnings. She won the Australian Open and US Open, both in 2016. She has reached the finals of Wimbeldon twice (2016 and 2018).