Ana Ivanovic net worth: Ana Ivanovic is a Serbian professional tennis player who has a net worth of $16 million dollars. Ana Ivanovic started playing tennis at the young age of five years old after watching Monica Seles play on television. For her fifth birthday present she received a tennis racket and has been playing ever since.

2004 was the year that Ivanovic's career started to take off. She made the finals of the Junior Wimbledon tournament, as well as going 26-0 on the International Tennis Federation. Ana Ivanovic went on to win her first singles title in 2005 at the Canberra International and finished the year as the 16th ranked female tennis player in the world. In 2006 she won the Rogers Cup and climbed to 14th ranked. Her career continued to take off as she finished 2007 ranked #4. In 2008 Ana Ivanovic won her biggest tennis tournament, the French Open, where she had finished as runner-up the previous year. She also was the runner-up at the 2008 Australian Open, losing to Maria Sharapova. Since then Ana has gone on to finish in the Top 20 almost every year. In addition to being a tennis pro, Ana Ivanovic is known for her good looks. She has been given the titles of sexiest female (tennis) player, best-looking tennis player of all-time, most beautiful body in sport, hottest female athlete on the planet, as well as finishing 11th on FHM's Sexiest Women list in 2009. She has won over $11 million in career prize money. In other business ventures Ana has appeared in many tennis video games, as well as making an appearance in the song "Hurricane Ana" by a Serbian rapper. 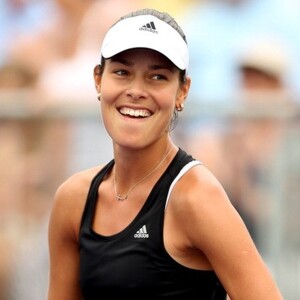