Amelie Mauresmo Net Worth: Amelie Mauresmo is a French retired professional tennis player who has a net worth of $8 million. Amélie Mauresmo was born in Saint-Germain-en-Laye, France in July 1979. She started playing tennis at just four years old. Amelie won the junior French Open and Wimbledon singles titles in 1996 and was named Junior World Champion.

In the 1999 Australian Open she reached the final without being seeded. She became the third French woman to reach the Australian Open final. After defeating Lindsay Davenport Mauresmo came out as a lesbian to the international press. In 2004 she lost to Serena Williams in the Wimbledon semifinals. Amelie won a silver medal at the Athens Olympic Games. She represented France in the Olympics in 2000 and 2004, and also for the Fed Cup. In September 2004 she became the world #1 ranked female tennis player and became the first French player to do so. Mauresmo won Grand Slam singles titles at Wimbledon and the Australian Open. She finished her career with 25 titles and three doubles titles. Amelie earned just short of $15 million in career prize money. She retired in 2009 and has acted as an advisor and is now a coach for Andy Murray. 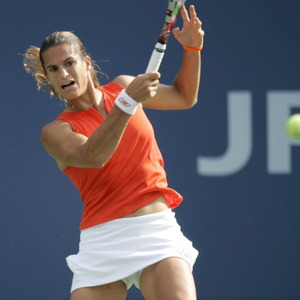