Amanda Anisimova net worth: Amanda Anisimova is an American professional tennis player who has a net worth of $2 million. Amanda Anisimova was born in Freehold, New Jersey in August 2001. She is right handed with a two-handed backhand and is coached by Carlos Rodriguez. Anisimova made her professional tennis debut in 2016 and has won more than $1.4 million in prize money. In 2019 she reached the semi finals of the French Open. She also reached the fourth round of the 2019 Australian Open. Amanda Anisimova became the second youngest player to be ranked in the top 100 by the Women's Tennis Association when she was ranked at #21 in October 2019. She won her first WTA title at 17 years old which was the Copa Colsanitas in April 2019. Her father Konstantin Anisimova has also been her coach and helped her become ranked #2 in the world as a junior. Amanda Anisimova won the 2017 Junior US Open and was the first American finalist at the French Open girls' singles tournament for 14 years. She defeated Petra Kvitová when she was just 16 years old and later upset #3 Simona Halep at the French Open. 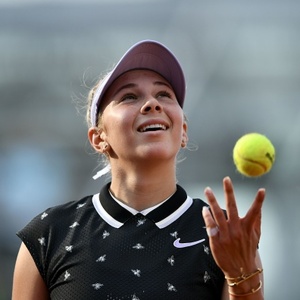