At a time when racism and prejudice were widespread in sports and in society, Gibson was often compared to Jackie Robinson. Gibson's five Wimbledon trophies are displayed at the Smithsonian Institution's National Museum of American History.

Althea Gibson was born August 25, 1927 in Clarendon County, South Carolina. In 1956, Gibson became the first person of color to win a Grand Slam title (the French Open). The following year she won both Wimbledon and the U.S. Nationals (precursor of the U.S. Open). She won both again in 1958 and was voted Female Athlete of the Year by the Associated Press in both years. 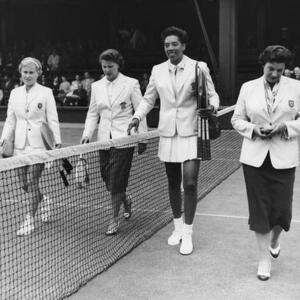