In both 1998 and 2001 he finished as the runner-up at the French Open. Corretja won the ATP Tour World Championships in 1998 and was ranked a career high #2 in singles rankings in 1999. He was instrumental in helping lead Spain to the country's first ever Davis Cup title in 2000. Corretja finished his career with a record of 438 – 281 with 17 career titles. He won a Bronze Medal at the 2000 Olympic Games representing Spain. Since retiring he coached Andy Murray in 2008 and 2009. He also coached the Spanish David Cup team from 2012 to 2013. 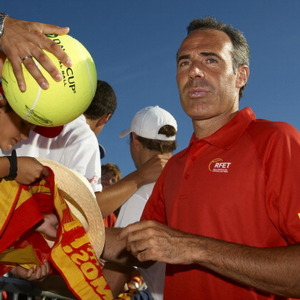