What is Zlatan Ibrahimović's Net Worth?

Zlatan Ibrahimović is a Swedish professional football player who has a net worth of $190 million. Ibrahimović is widely regarded as one of the best strikers of all time. He is one of the most decorated active footballers in the world.

Zlatan Ibrahimović was born in Malmö, Sweden, on October 3, 1981. His father, Šefik Ibrahimović, emigrated to Sweden from Bosnia in 1977 and is Muslim. His mother, Jurka Gravić, emigrated to Sweden from Croatia and is Catholic. His parents met in Sweden. Ibrahimović was raised Catholic. Ibrahimović has one sibling and four half-siblings. Ibrahimović's parents divorced when he was a child, and although his upbringing was divided between them, he spent more time with his father growing up. He started playing soccer at six with several local clubs. By the time he was 15, he was close to quitting football and working at the docks in Malmö instead, but his coach convinced him to keep playing.

Ibrahimović signed with Malmö in 1999. He transferred to Ajax in 2001. He won the Eredivisie title with the club in 2001-2002 and scored four times in the Champions League before Ajax was knocked out by A.C. Milan. In 2004, his tally against NAC earned "Goal of the Year" honors. He was moved to Juventus later that year after accusations from his teammate Rafael van der Vaart that Ibrahimović hurt him on purpose. While with Juventus, he was awarded the Guldbollen, an honor given to the Swedish football player of the year. Ibrahimović would go on to play with Internazionale, Barcelona, A.C. Milan, and Paris Saint-Germain. He is part of the Swedish national team, rejecting the opportunity to play for Croatia and Bosnia and Herzegovina. Ibrahimović has played in several World Cup qualifiers and was named captain of the national team in 2012. Sweden failed to qualify for the 2014 FIFA World Cup.

In October 2015, he became PSG's all-time leading goalscorer. The following year, he joined Manchester United on a free transfer and won the FA Community Shield, Football League Cup, and UEFA Europa League in his first season.

Ibrahimović is one of 10 players to have made 100 or more appearances for the Swedish national team. He is the country's all-time leading goalscorer with 62 goals. 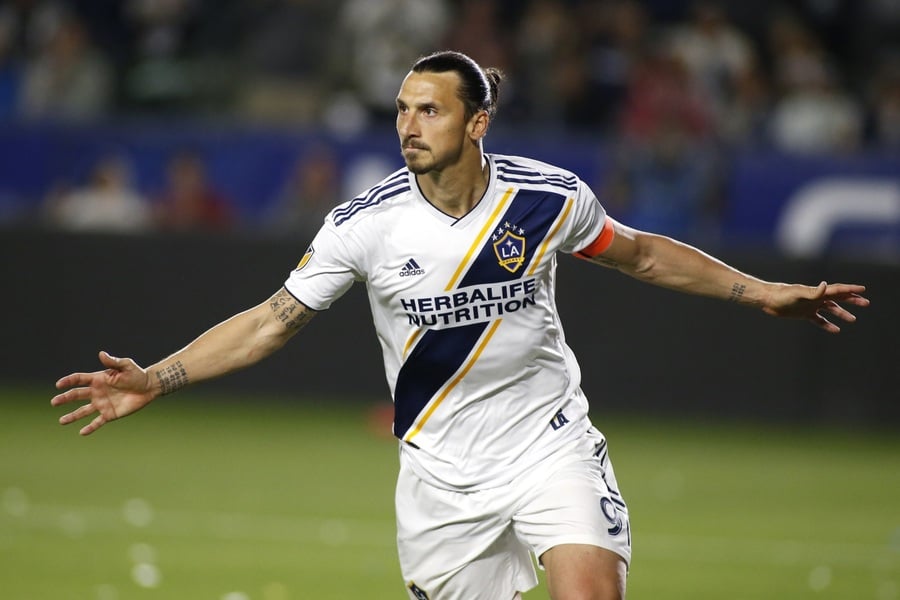 On October 8, 2019, a statue of Ibrahimović was unveiled in his hometown, outside Malmö's Stadion. The statue is 8 feet 9 inches tall and weighs almost 1,100 pounds.

The sports documentary "Becoming Zlatan "was released in February 2016. The film follows Ibrahimović through his early years with Malmö FF and Ajax all the way to his career with Juventus in 2005. The film has been screened at several film festivals in Europe.

As of August 2020, his contract with AC Milan is set to expire.

In 2020, he compared himself to Benjamin Button after becoming the first person to score 50 goals for both Milan clubs. He said: "I'm like Benjamin Button. I've always been young, never old."

He and long-time partner Helena Seger have two sons: Maximilian (2006) and Vincent (2008). He and Seger and their kids currently reside outside Los Angeles, although he still has a home in Malmö, where he spends his summers.

He is fluent in five languages- Swedish, Bosnian, English, Spanish and Italian.

He does not drink alcohol but considers himself a sugar junkie.

Off the field, Ibrahimović is known for being brash and outspoken. He also refers to himself in the third person.

Ibrahimović has faced criticism for being involved in several fights, including some with his own teammates.

On August 11, 2014, Ibrahimović paid $51,000 to send the Swedish national football team for the intellectually disabled to the INAS World Football Championships in Brazil.

Ibrahimović and Seger live in a mansion in Beverly Hills, California with their sons and their dog. Ibrahimović also has a home in Malmö.