Youri Djorkaeff Net Worth and salary: Youri Djorkaeff is a former French international footballer (soccer player) who has a net worth of $30 million dollars. Born on March 9, 1968 in Lyon, France, he played as a forward or as an attacking midfielder during his career as a player. During his stint with the French national team, Djorkaeff won the 1998 FIFA World Cup and the Euro 2000.

Throughout his career as a footballer he accumulated 82 caps and scored 28 goals for France. He also played for his country of France in UEFA Euro 1996 and the 2002 FIFA World Cup. Djorkaeff 's brother, Micha Djorkaeff, was a also a professional football player. Youri and Micha are the sons of former player Jean Djorkaeff. Youri retired from football (soccer) on October 29, 2006 after being sidelined in the second leg of the MLS Eastern Conference semi-finals because of an ankle injury. In 2012, he hosted a phone-a-thon for Armenia, held in Europe. The charity benefited the construction of community centers in villages throughout Artsakh and agricultural development in the Tavush Region. In addition, part of the proceeds were to be dedicated to providing urgent aid to the Syrian-Armenian community. Djorkaeff also released a singing single called Vivre dans Ta Lumière (meaning Living in Your Light in English). 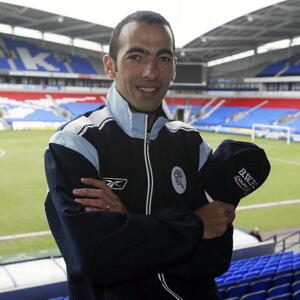