Xherdan Shaqiri net worth: Xherdan Shaqiri is a Swiss professional soccer player who has a net worth of $12 million. His annual salary is $4 million. Xherdan Shaqiri was born in Giljan, SFR Yugoslavia in October 1991. He is a winger who spent his youth career with SV Augst and FC Basel. He joined FC Basel II's senior team from 2007 to 2009 where he had 8 goals in 19 appearances. Xherdan Shaqiri played for FC Basel from 209 to 2012 with 18 goals in 92 games. He played for Bayern Munich from 2012 to 2015 with 11 goals in 52 caps. Xherdan Shaqiri played for Inter Milan in 2015 and played for Stoke City from 2015 to 2018 where he scored 15 goals in 84 appearances. He joined Liverpool in 2018. He has also represented Switzerland and joined their senior team in 2010 where he has scored more than 21 goals. In 2012 he won the Swiss Golden Player awards for SFAP Golden Player and Best Young Player. 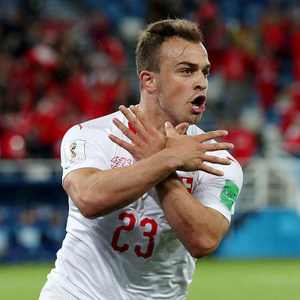