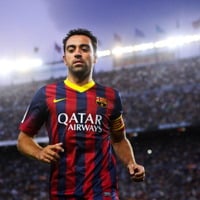 Xavi Hernandez net worth and salary: Xavi Hernandez is a Spanish professional footballer (soccer player) who has a net worth of $40 million dollars. Xavi Hernandez was born in Terrassa, Spain, and grew up playing football within the famed La Masia youth system. He played very well as young player, and rose through the ranks quickly. He made his competitive debut in the Super Cup final in 1998, scoring one goal. A few months later, he made his La Liga debut. He began playing for Barcelona in 1998, and quickly became one of the backbones of the team. He was named Player of the Year by multiple publications and organizations in the late 90s, and he was chosen to serve as team vice captain in 2004. He considered leaving Barcelona at one point, but was convinced to stay. His contract runs through 2014. He also plays for the Spanish national team, and holds the distinction of being the most successful Spanish player in history due to the number of international tournaments he has won while playing for Spain.