Xabi Alonso Net Worth: Xabi Alonso is a Spanish football player who has a net worth of $20 Million. Born in Tolosa, Spain on November 25, 1981, Alonso stands at six feet tall and plays for Bayern Munich. Alonso is part of a football family legacy. His father, Periko Alonso, played for Real Madrid with whom we won La Liga twice as well as a third time with FC Barcelona.

Xabi began his youth football career with Antiguoko and continued on with Real Sociedad into his senior career, which began in 1999 with Real Sociedad B. In 2000 Alonso was a loan to Eibar, which ended in 2001. He went on to play for Liverpool from 2004 to 2009, and made his grand contract with Real Madrid in 2009. He has played for a handful of national teams including Spain U18, Spain U21, Spain, and Basque Country. Along with being a strong midfielder, Alonso also acts as defensive midfielder and a playmaker. He participated in the 2006 World Cup and scored his first international goal as well as Spain's first goal of the tournament. He went on to compete in the 2012 World Cup and was a starting player for every game. He is currently married to Nagore Aramburu and has three children by the names of Jontxu, Ane, and Emma. 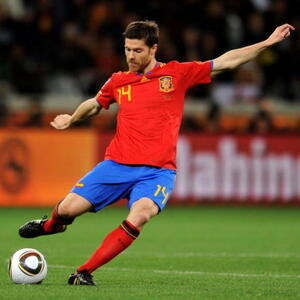