Willian net worth: Willian is a Brazilian professional soccer player who has a net worth of $12 million. Willian was born in Ribeirao Pires, Brazil in August 1988. He is a winger or attacking midfielder who spent his youth career playing for Corinthians. Willian played the Willian senior team from 2006 to 2007 and scored 2 goals in 20 appearances.

He played for Shakhtar Donetsk from 2007 to 2013 where he scored 20 goals in 140 caps. Willian played for Anzhi Makhachkala in 2013 before joining Chelsea the same year. Through May 2017 he scored 18 goals for Chelsea in 127 games. Willian has also represented Brazil at the under-20 and senior levels. He won five Ukrainian Premier Leagues, four Ukrainian Cups, three Ukrainian Super Cups, and a UEFA Cup with Shakhtar Donetsk. Willian won the Premier League twice and the League Cup once with Chelsea. He was named Chelsea Player of the Year and Chelsea Players' Player of the Year for the 2015-16 season. 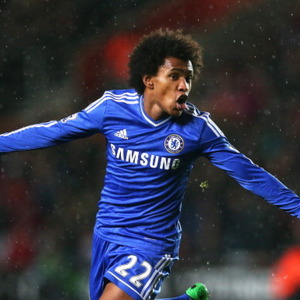