What is Wayne Rooney's Net Worth and Salary?

Wayne Rooney is a British footballer and coach who has a net worth of $170 million. At the peak of his playing career, Wayne eared an annual salary of $26 million. He won the Premier League five times with Manchester United and has received many individual honors including Premier League Player of the Season and FIFA Club World Cup Most Valuable Player of the Final. In June 2017, Wayne signed a three-year deal with D.C. United of Major League Soccer, and in the following year, he earned $30 million between salary and endorsements. Rooney has landed endorsement deals with several companies, including Nike, Nokia, Coca-Cola, and Ford.

Wayne Rooney was born Wayne Mark Rooney on October 24, 1985, in Croxteth, Liverpool, England. He grew up with mother Jeanette, father Thomas, and younger brothers Graham and John in a Roman Catholic household, and he studied at Our Lady and St Swithin's and De La Salle School. As a youth, Wayne played football for the Liverpool Schoolboys, Copplehouse boys' club, and Kirkdale junior league. He was recruited for the Everton Football Club's youth team at age 9 and began playing professionally for Everton when he was 16. Rooney's performance was so impressive that he was named the BBC Young Sports Personality of the Year in 2002.

In 2004, Rooney was snatched up by Manchester United after the club reached a £25.6 million deal with Everton. He wore the #8 jersey, and in his first match with United, he became the youngest player to score a hat-trick in the Champions League. Wayne scored 11 goals that season, making him United's top league scorer, and he earned the PFA Young Player of the Year award. The following season, Rooney scored 16 goals, broke his right metatarsal, and was named Man of the Match in the 2005–06 League Cup. During the 2006–07 season, he signed a contract extension, keeping him with Manchester United until 2012. That season, Wayne also became the proud owner of his first Premier League title winner's medal.

During the 2007–08 season, Rooney began wearing the #10 jersey, fractured his left metatarsal (sidelining him for 6 weeks), and injured his ankle; he scored 18 goals that season, and United won the Champions League's all-English final. In 2008, Wayne played in the UEFA Super Cup and the FIFA Club World Cup, and in January 2009, he injured his hamstring. He played in the 2009 Champions League Final and the 2009 Community Shield, and he was named Man of the Match again in December 2009 and PFA Players' Player of the Year in April 2010. In October 2010, Rooney signed a new 5-year contract with Manchester United amidst rumors that he wanted to leave, and the following year, he became the highest-scoring Englishman in the history of the Champions League.

In February 2014, Wayne signed another contract extension, agreeing to play for United until 2019, and he was named club captain for the 2014–15 season. In January 2017, Rooney scored his 250th goal for Manchester United, making him the top goalscorer in the club's history. Wayne signed a 2-year contract with Everton in 2017 and a 3 1/2-year contract with Major League Soccer's D.C. United in 2018. Rooney became D.C. United's captain after just 3 games and was named their MVP at the end of the year.

In 2020 Wayne left D.C. United to become a player-coach for the English Football League Championship club Derby County. In January 2021 Wayne announced his official retirement from playing so he could become Derby's full-time coach. 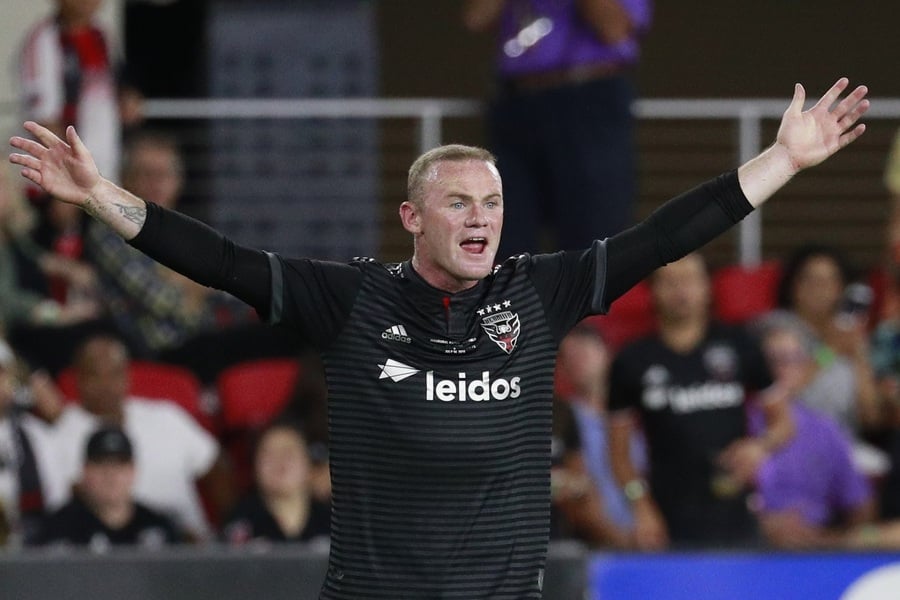 In 2006, Rooney sued "The Sun" and "News of the World" over claims that he had assaulted his wife, and he was awarded £100,000 in damages, which he donated to charity. Also in 2006, Wayne was sued by Everton manager David Moyes for claims made in "My Story So Far," and the lawsuit was settled for £500,000 in 2008. In September 2017, Rooney was arrested for drunk driving; he pleaded guilty in court and was fined £170, lost his driving privileges for 2 years, and was ordered to complete 100 hours of community service. The following year, he was arrested at Washington Dulles International Airport for public intoxication and profanity.