Toni Kroos Net Worth: Toni Kroos is a German professional soccer player who has a net worth of $25 million. Today he plays as a midfielder for the German Bundesliga club FC Bayern Munich and the Germany national team. He was born in Greifswald, East Germany in 1990. He spent a lot of his youth playing football and even missed a lot of school because of it.

His first club was Greifswalder SC. He joined FC Bayern Munich at the age of 17. He has won three titles with Bundesliga and the 2013 Champions League. He was loaned to Bayern Leverkusen in 2009-2010, where he scored ten goals. Toni Kroos has been a part of the Germany national team since 2007. He played on the under-17, under-19, and under-21 teams before playing for the senior Germany team as part of the 2010 World Cup. Kroos played for Germany in the Euro 2012 competitions. He played in eight of ten games and Germany won all of their matches. During the 2014 World Cup qualifiers he scored two goals for Germany in a win over Ireland. He has been praised for his passing accuracy and ability to set up teammates for scoring goals. He has been touted as the "Complete Midfielder". His brother also plays soccer and his father is a coach. 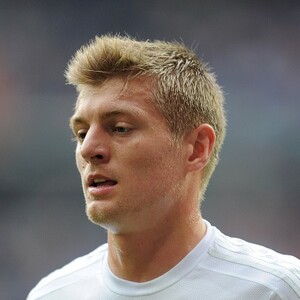