Tim Howard net worth and salary: Tim Howard is an American soccer player who has a net worth of $10 million and annual salary of $3 million. Born in North Brunswick, New Jersey, Tim Howard showed early athletic ability, excelling in both basketball and soccer throughout high school. His soccer abilities ended up eclipsing his very solid basketball ability, and he showed great promise as both a midfielder and a goalkeeper.

He began playing on the U.S. Youth National circuit when he was 15, and was invited to play with the North Jersey Imperials of the United States Independent Soccer League just before graduating from high school. He was very quickly promoted to play with the Major League Soccer team, the MetroStars, and remained with the team from 1998 to 2003. He played very well while with the MetroStars, and became the youngest player to win the MLS Goalkeeper of the Year Award ever. He signed with Manchester United in 2003, and played moderately well for them until 2007. Since then, he has played very successfully for Everton, and is only the fourth goalkeeper to have ever scored during a Premier League game. Howard also plays for the United States National Team and has done so since 2002. He was unused as a substitute for the 2006 World Cup but later established himself as a first-choice starter in the 2010 World Cup as the US reached the Round of 16. On June 7, 2014, in the build up to the 2014 FIFA World Cup, Howard received his 100th cap for the United States in a 2–1 defeat of Nigeria and he is currently playing for the United States in the 2014 World Cup in Brazil. He is married to Laura Howard, with whom he has two children. As a child, Howard was diagnosed with Tourette syndrome and in 2001 was named MLS Humanitarian of the Year for his work with children with Tourette's. He is also very involved with Athletes in Action, a ministry arm of Campus Crusade for Christ.

In 2014, Howard showed off his arm and torso tattoos for PETA's "Ink, Not Mink" anti-fur campaign. 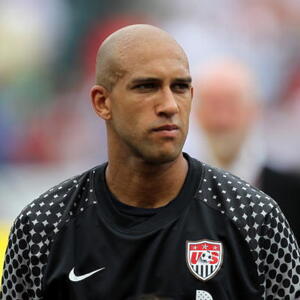