Thomas Muller Net Worth and salary: Thomas Muller is a German soccer player who has a net worth of $12 million. Currently, he plays as a forward and attacking midfielder for Bayern Munich and the German national team. Thomas Muller was born on September 13, 1989 in Weilheim, West Germany. Muller began his career with Bayern Munich II, scoring 16 goals in 35 appearances.

He moved onto the main Bayern Munich club in 2008, and has netted 99 goals in 256 appearances. Internationally, Muller's career with Germany began in 2010, and he's scored 17 goals through May 2014. Muller has also earned a number of club and individual honors; with Bayern Munich, he won the Bundesliga and DFB-Pokal in 2009-10, 2012-13 and 2013-14. In 2010 and 2012, he won the DFL-Supercup. In 2012-13 he won the UEFA Champions League, and won both the UEFA Super Cup and FIFA Club World Cup in 2013. Internationally, he helped the German national team finish in third place in the 2010 FIFA World Cup. Muller has also earned a number of individual honors: In 2010, he took home the FIFA World Cup Golden Boot, and was also named the FIFA World Cup Best Young Player, the VdV Newcomer of the Year, the World Soccer Young Player of the Year and the Bravo Award all in the same year. He was also named to the ESM Team of the Year in 2012-13. 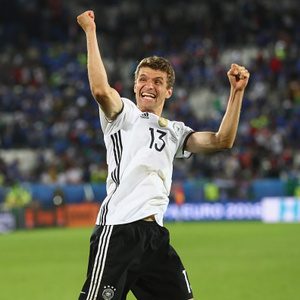